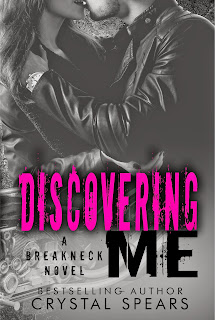 ~Synopsis~
Sniper Breaker has the reputation among the Breakneck MC as the brother looking for love. Deadly accurate with a gun, his skills protect him from the chaos that surrounds, but nothing will protect his heart. The brother that cares the most openly might be the one who gets hurt the worst.

Piper Lacy lives her life without constraint. Rescued after years of captivity, she refuses to waste one minute of her new-found freedom. Her best friend, Sniper, is the only person she’s shared her past with.

When crisis strikes the Breakneck World, the Red Ladies are called in to the compound, leaving Piper to question everything about her life and her love for a man she thought loved her in return.

But for Breakneck, that is only the beginning.

For mature readers only 18 +

Amazon MA: http://tinyurl.com/k92rty2
Amazon AU: http://tinyurl.com/n4kdv5q
~Author Bio~
Crystal Spears has always had a passion for literature. She fell in love with reading at an early age.
After spending a decade in business management, she began blogging and book reviewing, only to find that that didn't satisfy her craving. So, she began to write. Like any Indie out there, she had goals and dreams. She wrote Talania - a trip down memory lane, a beautiful, contemporary romance novel. It almost made it to the top, just almost. Someone told Crystal to write what she knew. She gaveserious thought to that advice.
For many years, her father had been CEO of a well-known gun and surplus store in Texas. He then
bought a tattoo shop where Crystal found herself surrounded by bikers. Hardcore bikers. The Bestselling Breakneck Series was born when Crystal decided to write what she knows. Don't get the wrong idea. Her Breakneck series is completely fictional, but based on things seen and heard, she now had a place to start writing from that knowledge. Seize Me was hardcore, and Crystal became the writer known as the chick with no boundaries. She took the critics the wrong way and made her next bestseller Withstanding Me a little tamer. Readers were quick to point out that they did not like that and demanded that Crystal return to gritty writing. When asked if she would write gritty from now on, her only answer was... "I'll write what my readers want me to write, and I'll also write what I feel."
Crystal resides in Indiana with her husband and their two children. They have a pit named Dozer, two
fish, and one fancy rat. They enjoy the outdoors, and camp, fish, and go boating as much as possible. 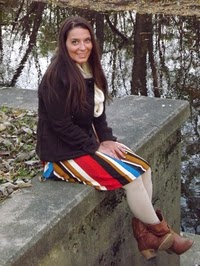 http://tinyurl.com/mrtm3h2
I would like to thank all of the Bloggers and fans for all of your continued support.
Crystal Spears
﻿