We would like to welcome back to RomFan Reviews author D.B. Reynolds!!  Today D.B. is here talking about her new release in her Vampires In American series Vincent which just released today *YAY*  Make sure to stick around and enter her awesome giveaway at the end and be sure to get your copy of Vincent.  I now turn the keyboard over to D.B.

Why Vincent?
D. B. Reynolds

Every character I write becomes my new favorite, and Vincent is no exception. I had one territory left and that was Mexico. My vampires come from all over the world, but I knew I wanted Vincent to be Hispanic. Partly because he was going to be Lord of Mexico, but also because I’d never written a Latino hero. So I made him big and gorgeous, with golden brown skin and black hair, and a neatly trimmed beard and mustache, about which he’s rather vain. And I gave him ancient roots in the Mayan culture, even though he’s nowhere near old enough—even as a vampire—to be Mayan. The blood is there on his mother’s side of his heritage and reflected in his name, Vincent Kuxim.

Vincent isn’t just beautiful, however. He’s charming as hell. One of those men who seduces every woman he meets, just because he can. He does it effortlessly, without even thinking about it. It’s simply who he is. And because women recognize and respond to the kind of man who loves women, they love him back. Old ladies are charmed by him, teenage girls wish they were older, baby girls stop crying when he says hello.  And adult women of a certain age simply want him.

Hell, I love Vincent, too. Apart from being physical gorgeous, he’s irreverent, he loves beautiful cars, he has a wicked sense of humor and a bit of a temper, and he’s loyal as a boy scout.

I don’t get to keep Vincent to myself, however. Lana is Vincent’s love interest and she’s not at all his usual type. Actually she doesn’t want to be anyone’s type, least of all Vincent’s, because after a lifetime surrounded by alpha males, she recognizes Vincent’s type, and she doesn’t trust him. She’s not immune to his charms, she simply resists him. Which Vincent naturally sees as a challenge.

And the game is on.


Sinaloa, Mexico . . . haunting deserts, hot nights, and vampires, who’ve been there for hundreds of years, watching from the shadows, playing their games, manipulating humans, and surviving at any cost.

Vincent Kuxim, powerful and charismatic, was made vampire by an ambitious leader looking for soldiers to pave his way to the rule of all Mexico. But more than a century later, Vincent’s Sire is looking over his shoulder as Vincent closes in for the kill, ready to claim the title Lord of Mexico for himself.

Lana Arnold is a bounty hunter, smart, beautiful, and determined to chart her own future. So when the most powerful vampire lord in all of North America enlists her help in tracking down a very old and elusive bloodsucker, Lana sees nothing but opportunity. There’s only one catch. The client wants her to take Vincent—a vampire she neither knows nor trusts—along on her hunt. Then again, maybe it’s herself she doesn’t trust, because Vincent Kuxim is sex walking in a pair of tight black jeans.

Thrown together by circumstance, Vincent and Lana soon find themselves battling an evil they didn’t know existed in a fight that makes Vincent all the more determined to destroy his Sire, seize Mexico for himself . . . and keep Lana by his side forever.

About the Author:
D. B. Reynolds is the RT Award-Winning author of the popular Vampires in America series of Paranormal Romance/Urban Fantasy and an Emmy-nominated television sound editor. She lives with her husband of many years in a flammable canyon near the Malibu coast, and when she’s not writing her own books, she can usually be found reading someone else’s. Visit her blog at www.dbreynolds.com for details on all of her books, for free stories and more.
Facebook
Twitter
Goodreads 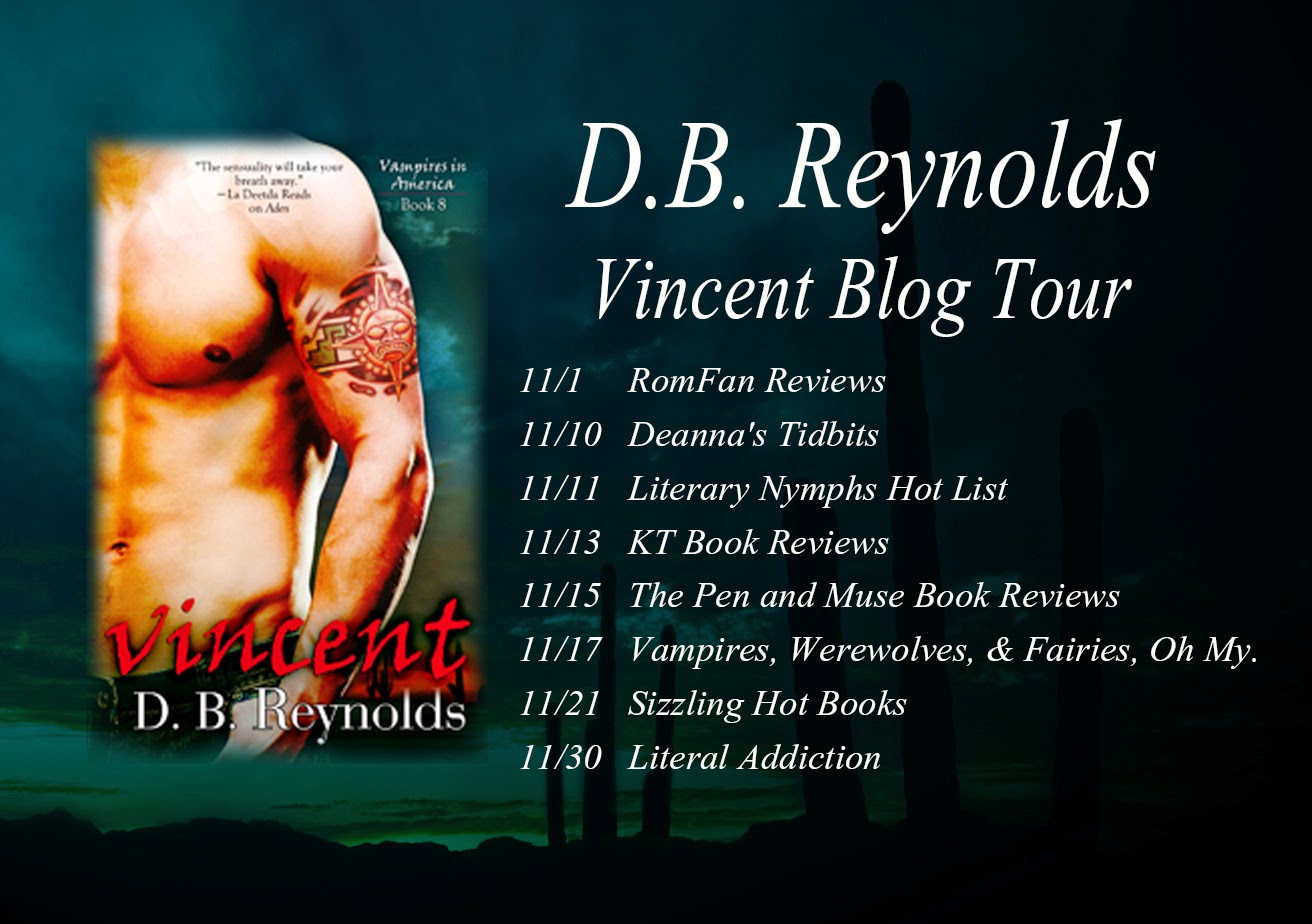