Add to your shelf!

Eliza Taylor was convicted and transported for the crime of stealing. She suffers being put in chains, locked up and degraded, to the point where life holds no meaning. Kept prisoner in the dark hold of a ship bound for a penal colony, Eliza is at the mercy of men who, at every turn, threaten to use her to their advantage. That is, of course, until fate lands her at the feet of Lord William Townshend. His kindness and loyalty capture Eliza's heart. Oblivious to her growing feelings, William continues his journey on a quest for another woman, one he set his heart on marrying when he was a young man. When the winds of change reveal that his feelings may be turning her way, Eliza doubts her battered and wounded spirit will have enough strength to survive falling in love. Eliza encounters obstacles she never dreamed she would face but is determined to conquer them to gain her freedom. The cost of her freedom is high, and the villainous sergeant in charge will do everything in his power to use her for his own vengeful purposes.

“Eliza. That is your name, isn’t it?” I nodded my head, not taking my eyes off him. He seemed quite young for what I was expecting. Mid to late thirties maybe, and he certainly had that air of authority surrounding him. His hair was blacker than mine, and his eyes were dark and serious. He sat in his chair, leaning into the back of it with his head resting on his fisted hand. He almost looked bored–almost. “Do you talk?”
Still not taking my eyes off him, I replied simply, “Yes.”
“Will you excuse us, Hank?” I looked to Hank. He nodded his head and left through the door we entered. When it clicked shut, the captain rose to his feet. He was a tall man, not as bulky as Hank, but he appeared strong and virile. He wore snug-fitting pants with boots up to his knees, and an off-white shirt that looked so soft I could rub my face in it. He was not particularly handsome. The lines on his face were quite hard. Actually, he made me feel scared. “I hope you’ve been treated well.”
I snorted my laugh and gave him a sharp look. “If being treated well means being knocked out and left for dead in a small, rodent-infested, smelly hole, and fed something that tastes like it has been scrapped off the floor of the galley, then yes, I think you have given us a voyage to remember.” My gaze didn’t waver. The captain just gave me a smirk and crossed his arms over his chest. His hair was just long enough to put it in a tie at the nape of his neck. Some of it had come loose, and he tucked it absently behind his ear.
“Well then, I’m glad I was able to accommodate you.” He was laughing at me. I just raised my chin and waited for him to say what he wanted to say. “You know why you are here?”

Playlist for A Love of Conviction

I was born in Darwin in the Northern Territory of Australia, and raised in Alice Springs (the very center of the country). I have always loved reading and telling "tall tales" and wrote poetry all the time. My greatest influence was my grandpa Majid who kept us entertained all the time with his stories, music and passion for writing.
I didn't tell anyone I wrote when I started because I was to shy, I have no idea why I was like that. I don't care now, I have stories to tell and I want to share them. I am not, and never will profess to be an awesome writer, but I will try to entertain, while bringing to life the history of my country, one page at a time.
Posted by RomFan Reviews at 12:49 PM No comments:
Email ThisBlogThis!Share to TwitterShare to FacebookShare to Pinterest
Labels: Blog Tour, book spotlight, historical

Ace Vaughn
The bad boy, the wild one - that’s what they call me. I guess it suits me. I work hard, but I party harder. I mean, I’m single, so why not? I like clubbing, drinking, and banging random women. Unfortunately, I sometimes hook up with the wrong chicks. Like the ones who gets attached after a romp in the sack, but sometimes that just comes with the territory. I never really thought that one would actually cause so many problems. How do I keep the one I love safe when a former one night stand falls off the crazy train and lands in Psychoville?

I finally get the job of my dreams as a backup dancer for Renegade for their world tour. It means that I’m going to be away from my friends and family for about a year, but they understand how important this is to me. I meet Renegade on the first day at the dance studio. I knew these guys were attractive, but seeing them in person is a whole different story. Hello! I know I need to remain professional, but damn, it is hard when two of the guys start vying for my attention. Who do I choose? Do I really want to get pushed into the spotlight by dating a member of Renegade? I’m not so sure. But if I do, what's my chances of taming the Wild Renegade?


Andria is married and a stay at home mother with two crazy little girls and two psychotic cats. She doesn't go anywhere without her precious iPhone and a purse full of animal crackers. She used to be completely obsessed with the Backstreet Boys, but now is only mildly obsessed (still goes to every concert when they are in town).  She loves cartoons and Disney movies, and can probably recite every line from Dumb and Dumber. Humor is a must in her life; otherwise, it would be completely boring. Pepsi is her weakness, along with anything chocolate. She can’t sing to save her life, but she pretends she can when she is alone in her car with the music blasting so that she can’t hear herself.

She loves to read Romance. Paranormal, Scottish, Military, Police, Firefighters, Athletes, Cowboys and M/M are her favorite. She is not so much a fan of YA, though. If you haven’t been able to tell from reading her books, she likes - whether she is reading them or writing them - lots of hot steamy sex.

Andria loves her fans and is always willing to chat. She works hard on her books, does not get offended easily, and has a pretty thick skin when it comes to negativity toward her work. She welcomes constructive criticism because she feels that is how one betters themselves, by taking that constructive criticism and using it. Andria’s books are her art, they are pieces of her, and she can only hope that people will like what she does. 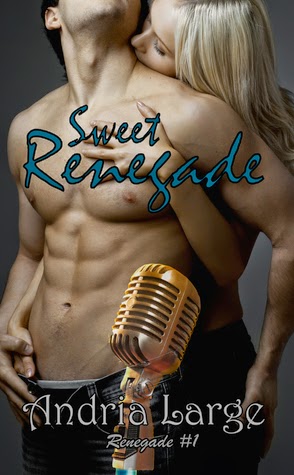 Sweet Renegade (Renegade #1)
What do you mean you’ve never heard of Renegade? They are only the biggest boy band in the world!

At twenty-three, I never thought that I would be where I am today. I live in a world of chaos, screaming fans, and temptations everywhere. There is only one thing that I truly want, but she’s constantly rejecting me. She thinks I’m too young and too immature; however, I will prove her wrong. I will show her that I can be everything she needs and wants in a man. If she will just give me a chance, I can show her how much she means to me. She has no idea how determined I can be or how hard I will fight to make her mine.

I’m presented with an offer that is just too good to refuse. Beau Kennedy wants one month. One month of being his girlfriend so that he can prove to me that he can be what I need. If at the end of the month, I don’t feel like he is the right guy for me, then we end things, and he will never ask me out again. One month? I can do that, especially if it means he will leave me alone when it’s over. What I didn’t expect, though, is all of the things that he brought to the table and all of the things that we end up going through during our month together, inevitably brings us closer together.

Can I still leave him when the month is up? My mind says yes, but I’m not so sure my heart agrees.