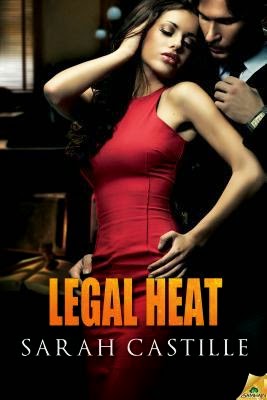 BLURB
Katy Sinclair made it to the brink of partnership at her high-powered law firm with hard work, dogged determination, and the ruthless self-discipline to cultivate a conservative public image. But when she follows an evasive witness into a sex club, she can’t deny herself a red-hot sexual encounter with the seductive bartender who sets her body on fire. She’s sure no one will ever know about her indiscretion —until she walks into the courtroom to find her dirty little secret is the opposing counsel in the most important case of her career.

As the managing partner in a struggling law firm, hot-shot attorney Mark Richards can’t afford any mistakes that might cost him his biggest client. Like getting involved with his beautiful, determined opponent—the mystery woman he hasn’t been able to forget. But when Katy’s quest for justice leads to death threats, Mark will sacrifice everything to protect her.

Now they’re risking their hearts…and their lives…in a race to catch a killer. Little do they know, the greatest danger lies closer to home.

Warning: This book contains explicit sex, light bondage, violence, murder, steamy shenanigans in the courtroom, naughty sexytimes in the boardroom, and an exceptionally hot hero with a versatile tie. Any objections will be overruled.

EXCERPT
“What about you?” He folded his arms and cocked an eyebrow. “Did you come here with a secret agenda?”

“No secret agenda. When Valerie told me she worked at the club, I was curious so I agreed to meet her here instead of at my office.”

Katy cocked an eyebrow and put her hands on her hips. She hadn’t been called a girl since she turned eighteen. “That was slightly condescending.”

His eyes crinkled and a smile played at the corners of his broad, sensuous mouth. “The correct response to a compliment is thank you.”

She walked over to another part of the collection and pulled out a dusty bottle. “I hardly think that was—”

Surprised by his warning tone, she turned to face him.

He sat back in his chair, long, muscular legs spread, corded forearms crossed, dark eyes calm and focused. But despite his casual manner, she sensed power and tension coiled in his lean body, like a cobra ready to spring.

A thrill of fear raced through her, followed by a sharp spike of arousal. She tempered it quickly. No way would she be pushed around even if secretly his commanding tone turned her on. She replaced the bottle in the rack. “I think we’d better get back upstairs.”

His voice softened. “Why are you running away?”

She spun around to face him. “I’m not running away. I…I’ve seen the wine cellar so I thought—”

Katy folded her arms. “Not at all.”

She froze and then sucked in a breath. “What do you mean by that?”

“Body language. You’re flushed, trembling. Your breathing rate has increased. Your eyes are wide. Your hands are clenched into fists. Your tongue…” He paused and his voice lowered to a husky growl. “Your tongue keeps darting out to lick your lips. If that isn’t fear, sugar, what could it be?”

Arousal, fierce and unfamiliar, shot through her like an electric current, flaming her body, burning a path to her core. Sweat broke out on her heated skin. Her mouth opened and closed but no sound came out.
Mark’s lips curled into a slow, sensual smile. “Come here, Katy-who-isn’t-afraid.” The sound of his voice, hard and low, sent a chill down her spine.

No, not a chill. A heat wave. A fever. Maybe she was ill. Maybe that’s why her cheeks burned and sweat trickled between her breasts.

But that didn’t explain the deep yearning that had risen up within her. Oh, she wanted to go to him, tear his clothes off, climb onto his lap, run her hands over his broad chest and then lower. It was as if she had been starving for years and he was a banquet waiting to be tasted.

Maybe that was the truth of it.

Giving herself a mental shake, she willed the sensation to go away. What the hell was going on? Was she seriously contemplating having sex with a stranger in the basement of a fetish club?

She swallowed past the lump in her throat. “Why?”

“Didn’t you want the Meursault?”

Katy nodded and her pulse kicked up a notch.

“Third row down, second bottle from the left.” He pointed above his head.

Katy raised an eyebrow. “A gentleman would get it for me.”

“I’m not feeling like a gentleman right now. Especially after your stirring performance upstairs and the way you’re looking at me now—like you want to devour me.” The heat in his eyes matched his voice, dark and sinful, like a rich Amarone. How long had it been since a man had gazed at her with such desire? After Justin’s birth, Steven had never once looked at her with anything more than mild interest.

She looked up into amused brown eyes and then drank in the sight of his hard, muscular body sprawled across the chair; his long legs open and inviting.

“It’s not the biting I’m worried about.” Nor was it him. Her gut told her he wouldn’t hurt her. If he had wanted to try anything, he wouldn’t have waited this long. No, it was her. She had lost control of herself and she had no idea what this new, lust-driven Katy Sinclair was about to do.

Still, his soft, cajoling voice drew her forward. Although she wanted the wine, she wanted him more. But after ten years on the bench, she didn’t remember how to play the game.

Her heels clicked on the flagstone floor as she closed the distance between them, stopping only a foot away. Even seated, he intimidated her. But God was he sexy. Her pulse raced and her throat turned dry.
He studied her for a long moment, his gaze intense and unwavering. “I’m beginning to wonder if we haven’t met before.”

Katy shook her head. “We haven’t. I’m sure of it. You’re not someone I would ever forget.” Or ever will. She stepped closer, her body now only inches from his. She caught the scent of his spicy aftershave and something raw and purely masculine. A quiver of fear ran through her followed again by the fierce rush of arousal.

He reached out and put his hands on her hips, drawing her close, until she could feel the heat of his breath on her breasts through the thin cotton of her shirt. She bit her lip to stifle a moan.

“Most definitely not,” he murmured.

Inexplicable desires wracked Katy’s body. She wanted to thread her fingers through his hair, straddle his body and press her breasts against his full, sensuous lips.

Her briefcase dropped, unbidden, to the floor. She ran a tentative finger along the square line of his jaw, rough with stubble, but pulled away at his sharp intake of breath.

“Put it back.” He lifted her hand and pressed it against his cheek, trapping it with his own. His skin was warm, firm. So sexy. She felt the slip of arousal between her thighs and drew in a ragged breath.

She eased herself out of his grasp. “You’re going to have to move. I’m not reaching over you.”

“Shame.” He stood with the grace of a man half his size and pulled the chair out of her way.

Katy reached for the bottle. Too high. She looked over her shoulder. Mark’s gaze was fixed firmly on her…ass. She snorted a laugh. “When you’re done, maybe you could give me a hand.”

Mark grinned and walked toward her, stopping so close she could feel the heat radiating from his body across every inch of her back. He put one arm around her waist and pulled her into his broad chest.

“Where do you want it, sugar?” he whispered, his breath warm and moist in her ear.

Red, hot flames of need licked through her body. “Want what?”

She could think of several places she wanted his hand. Places Steven had rarely touched. Emboldened by his obvious interest, and her own simmering arousal, she let her head fall back on his shoulder and looked up at him. “I’m not that kind of girl.”

His body shook with laughter. “What kind of girl?”

“The kind of girl who tells a man where she wants his hand.”

He stroked the curve of her waist and brushed his lips over her ear. “You don’t have to tell me, sugar. I know.”