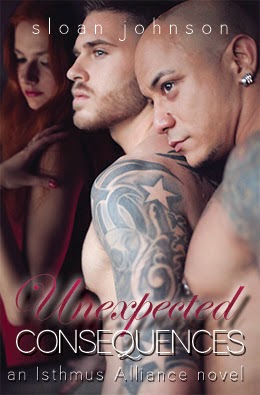 Interview with Sloan Johnson
RomFan Review and I would love to welcome Sloan Johnson as she tours this week promoting her latest installment in the Ithmus Alliance Series.  Unexpected Consequences picks up where Unexpected Protector leaves us dangling with a gut wrenching cliffie.  I had a chance to throw some fun questions at Sloan, so lets go see what she had to say!


*Tell me about your inspiration for UC. What are your future writing plans?
Unexpected Consequences felt like a natural progression for the Isthmus Alliance series. Since the release of Unexpected Angel, people have been asking for Zeke’s book. While writing Unexpected Protector, I started to have a clearer picture of who Zeke is and what makes him tick. He’s probably my favorite character in the series.

As for future writing plans, I’m currently working on a few standalone projects and will be working on Liam’s story later this spring.

*Is it helpful to have visual muse or do you prefer to generate them in your mind first?
It all depends on the story. There are times when a picture of someone will spark an entire story. Other times, I find myself fighting to find an image that matches what I see in my mind. With Zeke and Jeff, I struggled until I was introduced to Nico and Tomas, who wound up being the cover models for the book. There was one particular picture of the two of them that solidified so much about both characters.

*Any specific writing rituals?
I start writing every day with Get Thru This by Art of Dying. It’s become so much of an anthem to me that I have a bar of music from the song tattooed on my arm.

*What type of books do you like to read in your spare time? What was the last book you read?
I’m just as much of a sucker for the indie books as everyone else. There are months my one-click habits are a bit embarrassing! What I read depends on my mood, but most of the time I need something with darkness and angst. Right now, I’m working my way through The Arrangement series by HM Ward.

*Do you let your family read your books? Are they supportive of your writing?
For a long time, I didn’t. Now, my husband reads every book I release. It’s fun to see how he reacts because he waits until I give him permission to read, so he experiences the same emotions of waiting as everyone else.

*Brawn vs Brain...your favorite kind of man?
Brains win every time! You never know when something will happen that can weaken a big, burly man or mar a beautiful man’s face, but if he can make me laugh and challenge me to think, that’s something I’ll fall for every time!

*What is your favorite item to splurge and treat yourself with?
Music. I’m a complete music junkie and will attend every concert I possibly can and have an impressive CD collection (all recent purchases) even though it’d be more convenient to have everything on my iPad. I like having a hard copy and burning it onto my tablet.


Thank you again Sloan for stopping by RomFan Review today.  I know you're busy...now get back to work ***cracks whip***. Mwah...

Readers, don't forget to checkout the Facebook party! Clickey the linkey below :)

Synopsis:
Zeke Reed lives his life by his rules, the biggest one being that he refuses to settle down. Through the years, it has become a running joke amongst his circle of friends that his condo would be well served by the installation of a revolving door.
That’s what makes his friendship with Mary and Jeff work. All three of them are looking for some no-strings-attached fun. Until fate steps in, making them all take a look at what’s been developing while they’ve been busy fooling around.
Unfortunately, every decision in life has consequences. When you choose to openly share your life with more than one person, things get complicated. Will Zeke, Jeff and Mary be able to stand together as the world tries to pull them apart?

Sloan Johnson is a big city girl trapped in a country girl’s body. While she longs for the hustle and bustle of New York City or Las Vegas, she hasn’t yet figured out how to sit on the deck with her morning coffee, watching the deer and wild turkeys in the fields while surrounded by concrete and glass. When she was three, her parents received their first call from the principal asking them to pick her up from school. Apparently, if you aren’t enrolled, you can’t attend classes, even in Kindergarten. The next week, she was in preschool and started plotting her first story soon after. Later in life, her parents needed to do something to help their socially awkward, uncoordinated child come out of her shell and figured there was no better place than a bar on Wednesday nights. It’s a good thing they did because this is where she found her love of reading and writing. Who needs socialization when you can sit alone in your bedroom with a good book?

Now, Sloan is a tattooed, purple haired mom of two kids, one of which was a thank you present to her husband for letting her get a Staffordshire Terrier with more anxiety issues than Sloan has, which is saying something. She’s been kicked out of the PTA in two school districts and is no longer asked to help with fundraisers because she’s been known to lose herself in a good book and forget that she has somewhere to be.
Website | Facebook | Twitter | Goodreads | Isthmus Alliance FB Group