There's a new Alpha in town… and he's a Brit!

Darcy Nicole Sheridan, is 22 years-old, beautiful, single, spirited, sexy and - spoiled. She knows that about herself. Raised by wealthy (and doting) parents as an only child, Darcy pretty much coasts through life until her heart was inexplicably broken by her boyfriend, Darin.

To ease the pain, Darcy flies to Belize over the holidays fully intending to wallow in self-pity and distance herself from her ex. Her pity party is short-lived however, after observing a very handsome, very intriguing man on the beach. Darcy becomes the focus of the smokin' hot, wealthy and somewhat mysterious 'E.J.'

Soon she finds herself entangled with an alpha like no other… Her world is rocked by a series of events that will forever change the course of her life, showing her what love is all about; and forcing her to come to terms with hidden sexual pleasures only one man could fulfill…

This book is intended for mature audiences.

I awoke with a start; my wrists were painfully sore. Then I remembered. I felt a smile play on
my lips as my fingers massaged the tender flesh on one wrist, soothing the skin that had been chaffed by the handcuffs My ankles had been bound together tightly with leather straps which in my mind had been worse but I'd understood the necessity of it. Easton had been about inflicting pain last night, not pleasure. Well that's not altogether true; the pain had brought me pleasure not that he'd intended it to but it had nonetheless.

I snuggled back against him, feeling his arms tighten protectively around me. He was stirring
and I knew he hadn't slept well last night. He'd tossed and turned, repositioning himself a half dozen
times around me asking me if I was okay. I knew he'd been apprehensive about how I'd react to my
punishment; concerned that he'd crossed the line with me or maybe with himself, but I'd leapt across that line, hands and feet bound tightly together into his world of discipline and respect and I understood the rules now; I comprehended this man.

I rolled over to face him, looking up into his smoldering gray eyes that were studying me
intently. Was he concerned I'd flee from his bed? Not a chance. I was still naked beneath his sheets. I
could still feel his cum dripping from me. My God! We'd fucked most of the night - after the punishment had been dispensed with that is. I'd never been with a man that had a sexual appetite comparable to Easton's. It was as if he'd been on a mission to bury himself in me, and despite my reddened behind and sore wrists and ankles, I hadn't wanted him to stop.

He lowered his mouth to mine, kissing my lips softly.

"Morning, love," he murmured, his voice rough with early morning. "Are you alright?"

"I'm fine, Easton. Stop asking me that," I whispered against his lips. "I want more."

"Don't say that," he snarled, immediately disengaging himself from me and sitting up. He raked
his hands through his fuck-tousled hair.

I frowned, perching myself up on one arm, my fingers reaching out to touch his sinewy muscled
back. "What is it?" I asked, frowning.

He stood up, distancing himself from me, not bothering to hide his agitation. "For Chrissake you
can't possibly think what happened last night can ever happen again. I won't let it," he snapped. "It's not what I want with you."

"Okay, I'm totally not following you here; I kind of thought it rocked."

He took two steps towards me, his eyes flashing. "That speaks of your needs, not of mine; at
least not anymore - not with you."

"I was pissed. Damn pissed! I'd been quite the trooper and was fucking proud of it, Now he was
telling me what? That I sucked at being punished?

"You're being an ass," I snapped, hoping to get his ire up, along with anything else on him that
cared to rise to the occasion.

"I am an ass," he spat, "You should've figured that out a long time ago. I don't want to be an ass
- not with you at any rate. You didn't deserve the things I did to you last night."

"Which things?" I asked.
He was silent.

The flogging?" I taunted. "The thin leather straps with the metal tips you flailed across my back
and butt. Your aim was perfect, by the way."

I saw his quick intake of breath as my words hit home. He turned towards the bathroom to put
more distance between us.

"Or the bondage?" I persisted, cockily, trying to draw him back. He stopped and turned towards me, his face masked with shame. "The titanium steel handcuffs attached to my wrists, and the leather
binds for my ankles making me unable to move while you fucked me raw."

"Who deserved it, Easton?"

"All of them - apart from you. All of the whores I've been with; the ones I've punished in that
way. Do you need names?"

"Only one," I replied, watching him with interest.

"Bianca," he snarled, his eyes flashing with fury. "It’s how I wanted to fuck Bianca, the traitorous
bitch. It's how I thought I wanted to fuck you until I realized . . ." he broke off mid-sentence, agitation once again settling in as he dealt with his own confusion.

"Nothing," he muttered, going into the bathroom and slamming the door behind him, leaving me to guess how he might've finished that sentence. 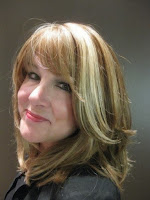 Andrea Smith is an Ohio native, currently residing in southern Ohio. Ms. Smith is the mother of two
grown sons; grandmother of four. The 'Baby Series' trilogy is Ms. Smith's first self-published work.
Having previously been employed as an executive for a global corporation, Ms. Smith decided to leave
the corporate world and pursue her life-long dream of writing fiction.