Promo and Review: Hers by Dawn Robertson

I am weak.
I am lonely.
I am a slut.
I am strong.
I am Dominant.
I am independent.
I am Seven James.

My entire life, no one has wanted me, and that was fine, because I sure as shit didn't need anyone else. Blah, Blah Blah, insert sad story here about negligent parents, and shitty siblings, and you have my life story in a nut shell. When my college boyfriend dumped me, it was just icing on the cake. Five years, and a booming career later I am here to collect my revenge.

That was until a delicious plaything walked into the kink club I frequent, and rocked my typically un-rockable world. Causing me to break the one rule I have lived by since Daniel Alexander walked out of my life, never have sex with the same person twice. Ever.

Warning!!!! Hers contains sexually explicit situations that may be uncomfortable for some. These include FF, FMF, and MFM interactions
Buy Links:
Amazon: http://amzn.com/B00FS2WBFM


Signed paperbacks are available at: http://www.eroticadawn.com/shop/ (All paperback copies purchased through EroticaDawn.com are signed and personalized.

About this author:
Dawn is a woman of many colors. Born and raised in the North-East, the youngest child of three, to two hard working, and extremely dedicated parents, she thrived on her love for creative writing. Her commitment to hard work lead her down a number of career paths over the years, stopping with her love for fiction.

Dawn is a mother, entrepreneur, and self proclaimed book whore.   For more about Dawn Robertson, visit : AuthorDawnRobertson.blogspot.com or join Dawn on Facebook. 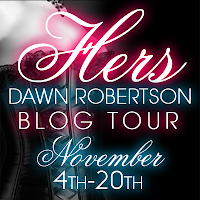 Review
Hers
By: Dawn Robertson
Self Pub
ISBN:  978-1492955948
Genre: Modern Romance, Ménage, F/F
Price: $3.99
When Seven James donned her alter ego Mistress Marilyn and walked into Sinners and Swingers, she never knew that she would meet the man would knock down the walls that had hardened with time.  Her past had ingrained in her that she was undesirable and unlovable.  Vengeance had been her life force, but when personal and professional worlds collide no one is unscathed.
Levi Parker was enamored by Mistress Marilyn at first sight and convinces her to one night of submission.  After an evening of giving himself to his Mistress for the night, they find themselves looking across the boardroom at each other.   He would not stop until she was his again.
The emotional rollercoaster from page one had me hooked.  Seven’s emotional past scarred her deeply, but Levi was her champion.  Their sexual encounters were smoking hot!  Who can deny a sexy, confident man who will submit to a woman?  The harder she pushed, the stronger he held on making her see the beauty he saw in her.