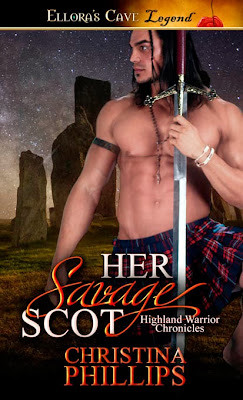 ISBN#9781419940446
Release date: 20th November 2013
When tough Scot warrior Connor MacKenzie rides into the barbaric lands of the Picts on a mission for his king, he never expects to be captivated by a beautiful Pictish widow. Drawn under her spell, yet unaware of her true identity, he risks everything for one passionate night in her arms.


Aila, princess of Pictland, swore long ago she would do anything within her power to help defeat the Vikings who invaded her land and murdered her husband. But after meeting Connor, her frozen heart thaws and once again she imagines a future filled with love and passion.
When Connor delivers the message from his king, Aila becomes a pawn in a deadly game of politics. Her heart belongs to Connor, but she must marry the prince of Dal Riada – Connor’s half-brother. But the fates have other plans for the star-crossed lovers as they fight their enemies and themselves to find true love.
Read Chapter One of Her Savage Scot
Excerpt:
She lifted her head and Connor’s lips brushed hers. A fleeting, tantalizing touch. A touch that seared her core with a wild, reckless longing.
“I’ve wanted to kiss you since the first moment I saw you.”
His ragged whisper scorched her parted lips. She hadn’t been mistaken. “I thought you far from interested that first day. You surely didn’t give any indication of your thoughts.”
He moved closer. The breadth of his shoulders blocked out the rest of the world, his white linen shirt sculpted his impressive chest. And the weave of his plaid branded her through the softness of her gown.
“How could I? You were an aloof Pictish lady and I a mere savage Scot.”
She leaned into him, soaking up the hard ridges of his chest, the fresh scent of his hair, the faint sweetness of mead on his breath. “So what has changed?”
“Nothing.” His fingers tightened around hers and his eyes enslaved her. “Yet everything.”
His words curled through her heart, shimmered in her blood. Nothing. Yet everything. The chance of them having a future together was remote. And yet she had been given this time with him. Moments to savor, to cherish. To remember for the rest of her life.

Ellora's Cave | ARe | Nook | Amazon UK |  Kobo | Goodreads
The Highland Warrior Chronicles
From the Kingdom of Dal Riada, Scots warriors Connor MacKenzie, Cameron MacNeil and Ewan MacKinnon pledge to keep the peace in the wild Highlands of Pictland. But each man is destined to fall in love with a Pictish princess - three cousins who are determined to save their beloved land from the savage invaders. Instead they lose their hearts to their wild foreign warriors. 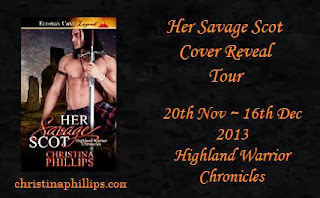 Christina loves writing dark tales set in the 9th century featuring tough Highland warriors who are brought to their knees by their brave Pictish princesses.

Christina is an ex-pat Brit who now lives in sunny Western Australia with her family. She is also owned by three gorgeous cats who are convinced the universe revolves around their needs. They are not wrong.


a Rafflecopter giveaway
Posted by RomFan Reviews at 8:00 AM
Email ThisBlogThis!Share to TwitterShare to FacebookShare to Pinterest
Labels: Contests, Cover Reveal