Blog Tour: No Turning Back by Deanna Jewel 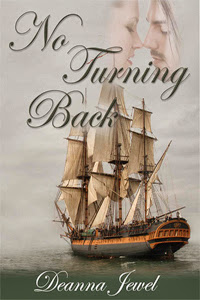 While avenging the death of his fiancé years earlier, Michael Nathaniel Clairmont, Duke of North Yorkshire, learns that he CAN love again. Will the woman he wants also learn to love again? He sets out to capture her heart.


Vanessa is heartbroken over recent events in her life; she’s also headstrong, flaunts London aristocracy and takes on breeding horses, something unheard of in the society circles of London. She finds herself trying to put the pieces of her life back together, but can she do it alone? With a child on the way, she is forced to do just that - their future depends on her strength. Then a friend offers to help. Dare she trust a man sworn to carry out a vow taken on a death bed? She refuses to accept that his love is true when his honor of sticking to his word is also at stake.


Can Nathan survive another heartache? Join him and Vanessa as they work through the torments of their past and work together to fight for their love and a future together.


Read Chapter One of No Turning Back as well as her other books at: BookBuzzr 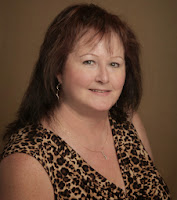 Deanna Jewel lives in the Pacific Northwest and has been writing multi-genre romance since 1991. She is married to a retired captain of the fire department. He’s also owned his own businesses for 25 years. They have two Siamese cats: Zoie and Sinbad, who keep them entertained. Deanna has enjoyed reading historical romance novels for over thirty years, camping with her family, and traveling.


She writes to draw the reader into the story to experience what the characters feel, to show both the hero's and heroine's points of view, and to take the reader away from their everyday stress to a place not yet visited.


A trip to Dubois, Wyoming, south of Yellowstone, inspired her time-travel novel. The landscape and town locations described in NEVER SURRENDER are real. Jon Daley, a professor at Boise State University, translated the Shoshone language that you will find in the book. This novel won an Honorable Mention in the 2008 Quill Awards at Writing.com.


NO TURNING BACK, her historical romance, takes place in England, 1778, was released in April 2010, and is available in print, eBook and iBook for download to your electronic readers.


Her newest novel, WHISPERS AT GHOST POINT, released in late December, 2012. Whispers takes place at an abandoned lighthouse in Wilmington, NC and is the sequel to No Turning Back. The characters are reincarnated into the present. Join Dana as she learns about her past while working toward her future. The dangers that lurk at an abandoned lighthouse pull her into a past she was unaware of but also involves a man she's never met...in this lifetime! 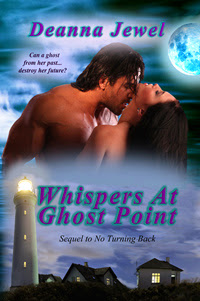 Book Trailers:
No Turning Back
Whispers at Ghost Point


CONTEST #1: On the 13th, I’ll pull one winner from those who comment and also leave your choice of gift card and your email addy in the comment (so I can reach you when I draw your name). One will win a $10 gift card.


CONTEST #2: I’m giving away FOUR $25 gift cards at the end of my blog tour! Get your entries in on my Blog Tour Grand Prize drawing, winner to be picked on Oct 14th!

Posted by RomFan Reviews at 8:00 AM
Email ThisBlogThis!Share to TwitterShare to FacebookShare to Pinterest
Labels: Blog Tour, Contests