RomFan Reviews would like to welcome Ashlyn Chase! Thank you for stopping by, Ashlyn.
Ashlyn: I always enjoy meeting new readers, so thanks for having me! 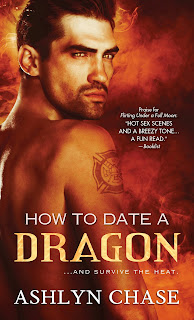 Tell us a little about your newest release How to Date a Dragon. Love the title by the way.
Ashlyn: We can thank my editor for the titles. I was calling each book in the series: Flirting with… Then fill in the species. Werewolves, Dragons, and Vampires. LOL. The series is called Flirting with Fangs, and book 1 became Flirting Under a Full Moon, book 2 is How to Date a Dragon and book 3 (coming in March) is Kissing with Fangs.

How to Date a Dragon is about Drake Cameron, a dragon shifter who, because he’s fireproof, makes an excellent firefighter. He just has to hide his shifts and make it look like he’s not taking stupid chances…like the stupid chance he took when he went back into a fully engulfed apartment building to grab Bliss Russo’s computer. The beautiful brunette begged, because she is in a TV design competition and all of her designs are on her computer. When she looked like she might cry, he ran back in—a stunt that got him suspended.

What can we see coming from you in the future, will it be Anthony’s story by chance?
Ashlyn: Yes. Good guess! Readers accuse me of always saving the best for last. Well, it’s just worked out that the vampires have had their stories come last in the trilogies. It wasn’t on purpose, I swear! And ‘best’ is a relative term. It all depends on a reader’s individual taste. Some prefer wolves. I trust some will like dragons best. Personally, I love this story…and it’s my editor’s favorite.

What was the hardest part of writing your book?
Ashlyn: This one seemed to flow right out of my brain and onto the page. I love it when that happens. The hard part came when I found out I had been writing the wrong story for four months! Apparently the marketing department had the vampire story slated for October. I was so happy that I was ahead of deadline. Can you imagine finding out you wrote the wrong book and had a month to get the right one done? It all worked out. They accepted the dragon story—and it’s coming out a month early, because it wasn’t about a vampire (which has taken a top spot in Halloween lore, apparently.)

How would your friends describe you?
Ashlyn: Quirky, funny, friendly, and lord knows where they get this from…classy! I guess as long as I keep my mouth shut, I can pass for normal.

What’s something fans would find fascinating about you?
Ashlyn: I’ve had to overcome a lot of adversity. Comedy often springs from tragedy. I don’t talk about that, because I believe it’s important to stay upbeat. My job is, after all, to lift people’s spirits and entertain them…help them escape from their own tough times. It helps me rise above them too.

As a child, what did you want to be when you grew up? How has that childhood dream affected your career?
Ashlyn: According to my mother, my first aspiration was to become a telephone operator. I used to pinch my nose and practice saying, “Number please…” Unfortunately, I’m really dating myself by admitting that. Instead, I became the Lily Tomlin of paranormal romance.

Do you ever suffer from writer's block? If so, what do you do about it?
Ashlyn: I refuse to give into it. I write every day. If a story isn’t flowing, I write something else and let the story percolate. There’s a reason it’s refusing to go where I want it to. Often, it takes another direction completely and I need to let it.

What's the weirdest thing you've ever done in the name of research?
Ashlyn: I try not to be too weird when I ask people to help me make my books more realistic. Recently, I toured a homeless shelter and interviewed a case worker. That’s only weird because I used to work in one myself! I didn’t tell him that. It was a different type of shelter with different rules. I learned a lot.

If you could be a paranormal creature, which one would you be?
Ashlyn: Probably a fairy. They get to fly, use magic, and wear pretty things.

What’s a guilty pleasure you have?
Ashlyn: Reading romance novels, of course! And good coffee. And occasional sugar-free chocolate. I’ve given up every other vice I ever had—and I had a lot of them!

What is sexier boxer or briefs?
Ashlyn: Commando…or the combo of boxer-briefs. Nice outline. No speedos with beer guts, thank you.

Who’s more fun, bad boys or perfect gentlemen and why?
Ashlyn: Fun? Bad boys, of course. Who would I trust with my purse and my person? A gentleman, only. My heroes are a combination of both. Charming and light-hearted, but slow to anger and dependable.

Let the Sparks Fly…
Bliss Russo thought nothing exciting ever happened in her life. Until her building caught on fire and she had to be carried out of the flames in the arms of a gorgeous fireman. Sure, her apartment is now in shambles and she'll have to start her huge work project completely from scratch. But at least her love life is finally looking up...if only she can find her red-hot rescuer again.

Dragon shapeshifter Drake Cameron is the last of his clan, and the loneliness is starting to claw at him. He's met only one woman who might be able to stand the shock of his true nature. After all, she barely batted an eyelash when her home burned down. And feeling her curves against him was just as hot as the inferno. Just when he thinks he'll never track her down, she walks into his firehouse—with no idea what she's about to get herself into...

“[Ashlyn Chase] entertains with a voice that makes reading her stories pure pleasure. It’s like spending time with your favorite friends. Reviewer Top Pick” —Night Owl Reviews on How to Date a Dragon 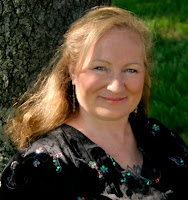 Ashlyn Chase describes herself as an Almond Joy bar.  A little nutty, a little flaky, but basically sweet, wanting only to give her readers a satisfying experience.
She holds a degree in behavioral sciences, worked as a psychiatric RN for several years and spent a few more years working for the American Red Cross.  She credits her sense of humor to her former careers since comedy helped preserve whatever was left of her sanity.  She is a multi-published, award-winning author of humorous erotic and paranormal romances, represented by the Seymour Agency.
She lives in beautiful New Hampshire with her true-life hero husband who’d look like Hugh Jackman if you dyed his hair, and they’re owned by a spoiled brat cat.  For more information, please visit
www.ashlynchase.com, follow her on Twitter https://twitter.com/#!/GoddessAsh, and like her on Facebook, https://www.facebook.com/AuthorAshlynChase.

To Purchase How To Date a Dragon:
Amazon
Barnes and Noble
Books-a-Million
IndieBound
Chapters/Indigo
iBookstore
Sourcebooks

Contest open to US and Canada residents
a Rafflecopter giveaway