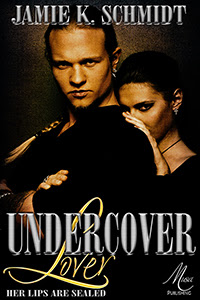 Undercover Lover: Her lips are sealed

When Reiki therapist Pamela Krupin is attacked by thugs who work for her client, a Russian mob boss, the boss orders his godson, Detective Drake Logan, to protect her. Their attraction flares across Pamela's line in the sand: She will not violate her patient's confidentiality. But when Drake's godfather is murdered and Pamela is targeted, together they have to find out what the mob is really after.

They stood up to leave when Vera brought over their checks. Drake took both of them and pulled out his wallet.

“You don’t have to do that,” she protested and tried to take her check from him.

“It’s the least I could do. Besides, it’s my pleasure to treat a beautiful woman to lunch. I usually get to buy hot dogs from the street vendor for me and my partner.”

“Well, thank you,” she said graciously and then impulsively kissed him on the cheek.

His face was smooth and warm. His cheek just having the slightest brush of whisker, unlike Ralphie whose beard was as riotous as the rest of his blond curls. Drake turned his head and their lips just missed brushing each other. There was a flicker of desire deep in her belly and her fingers itched to slide into his jacket and see if he had muscles to go with that suit.

Staring at his jaw, she wondered again why she was comparing him to Ralphie. Ralphie was her patient. It wouldn’t be ethical to be anything more. And this detective was a little too slick for her. Maybe it was the ponytail or him not taking off his sunglasses, but warning bells started to go off when he slid his finger down her chin and tilted it up so she was looking at her dual reflection in his sunglasses.

“Are you doing anything Friday night?” he asked.

“I’m working,” she said and stepped back. Just like that the spell was broken. She slung her purse over her shoulder. “Thank you again for lunch. Good luck with your search.”

“Stay safe,” he said and she felt his eyes on her as she walked out the back door.

Jamie K. Schmidt has over thirty short stories in publication. Her romantic suspense novel UNDERCOVER LOVER, published by Musa Publishing, will be released September 13, 2013. THE QUEEN’S WINGS, book one of the Emerging Queens series, a paranormal dragon romance will be published by Entangled's Edge line this fall. Book One of her contemporary romance series, INNER GODDESS, will be published by Random House's Loveswept line June 2014.
Jamie holds a Bachelor of Arts Degree from the State University of New York at New Paltz in Secondary Education English. She’s also held various jobs as a call center manager, a Tupperware consultant, a paralegal, and finally a technical writer for a major corporation. She is an active member in the Romance Writers of America (RWA), serving as the President for her local chapter Connecticut Romance Writers of America (CTRWA).
www.jkschmidt.com
Posted by RomFan Reviews at 8:00 AM
Email ThisBlogThis!Share to TwitterShare to FacebookShare to Pinterest
Labels: book spotlight