Blog Tour: Out From Under by Selene Chardou 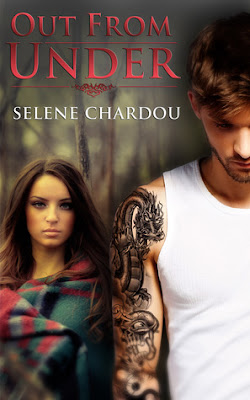 "I have always been strong, independent and wanted a life that belonged to me. It's the very reason why I chose to attend Stanford because it is away from the small-town life that seems more Twin Peaks than charming. Secrets are a dangerous commodity and Pine Bluff has them in spades. So do my parents, and the dirtiest secret of all is my brother, Trey. Sergeant at Arms for the Demon's Bastards, a criminal, a felon, and perhaps the catalyst for the tragedy that destroyed my life just days before I was supposed to leave for college.
"Now I am on the run because my life is in danger and I could be next. I don't want to live my whole life looking over my shoulder and I don't want to live my life shrouded in despair. Anxiety has me in a death grip, unable to let go. I pop Xanax to get through the day and were it not for my famous cousin, I would probably be dead already.
"My name is Trista Lennon, and I am tired of being afraid."
Linx Carter never thought he could help anyone when he could barely help himself. He is hanging on by a thread after a tough, six-month Gods of Rock Tour with his band, Winter's Regret, and Scarlet Fever. He has a greedy ex-wife, two sons and all he wants is to put the pieces of his life back together.
Linx knows there is something special about Trista from the moment they meet. She's wounded, in desperate need of a friend yet feminine, feisty and no one's charity case. She is the strongest woman he has ever known.
Through their friendship, they will find the strength to heal themselves and love one another but a feud between two gangs is brewing. Trista is caught in the crossfire, and by proxy, so is Linx. What they discover might not only cost them the love they have for one another but their lives too.

RomFan Reviews has done a review on Out From Under, and here's what we had to say:

For an eighteen year old, Trista is an old soul and can read you like a book. Linx is stunned when they first meet and will leaving you laughing out loud as she leaves him unfazed.  You cannot help but love these two together.  Their chemistry is one of experience and restricted by age.  The alternating points of view where well composed and shared a lot of deep insight into her characters.  All in all, it was a fabulous book and look forward to more from this author.

Explicit Excerpt:
I pulled back after our kiss ended. “She already knew. GPS tracking and what not. The phone is registered on her account. It can’t be that hard for two ex-Navy SEALs to find out direct longitude and latitude. She has no clue what we’re doing here, so who cares? We’ll be married in less than an hour.”
He smiled and this time when he kissed me, his mouth devoured mine, and it was the absolute best feeling. His lips suckled on my bottom lip before my mouth opened and was set on fire, the kiss turning into a soul-stirring lip-lock that had me coming up for breath.
Linx’s lips trailed down to my neck as he pushed aside the lapels of my rope to display my breasts. His fingers squeezed my nipples until they were rock hard; it was an exquisite pain, and the feel of his calloused hands on my soft breasts caused heat to spread through my skin. My whole being ached with want and need.
His tongue replaced his fingers on my right breast,  the warmth of his breath and that beautiful organ in his mouth was intoxicating. I felt light-headed from the stir of emotions and my stomach burst with the wings of butterflies. The feeling between my legs was worse because I was so turned on, I just wanted him to take me; no prerequisites, nothing but his hard cock inside me.
As his mouth circled my nipple, sucking hard, his free hand reached between my legs and massaged my aching clit. He quickly plunged two fingers inside of me, eliciting a gasp from me at the sensation.
The orgasm he coaxed from my body shook me to my very core and drenched his fingers in my juices. His mouth came to meet mine again and I moaned against it as his tongue forced its way between my lips, as he kissed me passionately, deeply. I stood on shaky legs as he withdrew his fingers and placed them in his mouth—fuck that was the ultimate turn on—before he grabbed me by the back of my neck and kissed me again.
A sudden knock on the window rudely interrupted us. We both looked to see Kelly, the shopper, smiling at us though her face was flushed like she’d run a marathon.
“How the hell did she get back inside our suite?” My heavy breathing tried to keep up with the thunderous beating of my heart.
Linx had completely and utterly did a number on me and the worst part was I never saw it coming.
“She’s got a card key to the room, babe.” He kissed me again quickly before he rested his head on my shoulder and stroked my back with gentle hands.
“My clothes must be here,” I whispered to him.
“I can’t wait to strip the dress off you later tonight,” he said to me, his mouth close to my left ear.
We stared at one another and I could see, and feel, his desire for me. Neither of us attempted to move though the sooner we got rid of Kelly, the sooner we could get married and finally have sex.

Author Bio:
Selene Chardou is a world traveler and the alter-ego of Elle Chardou.

Ms. Chardou’s writing is all about hot romance and exciting times with the wild, damaged, out of control and/or rich and famous set in the New Adult realm.

She is currently working on Rock My Heart, the first novel in the Scarlet Fever Series, which concludes the story of Kasper “Kaz” Gillian and Sydney Lundvik; she is also working on In Too Deep, the conclusion to The Lovers Duet. She also has a pop stars series planned and an MC series planned that chronicles the issues between Lucifer’s Saints and Demon’s Bastards motorcycle clubs.
Ms. Chardou has lived abroad in Stockholm (Sweden), Manchester (England), Los Angeles, the San Francisco Bay Area and Portland. She currently resides in Las Vegas, Nevada.﻿
Blog: The Realm of Selene Chardou
http://selenechardou.blogspot.com/
Pinterest:
http://pinterest.com/ellechardou/out-from-under-a-novel/
Follow Selene Chardou on Twitter:
http://twitter.com/#!/ellechardou
Like Selene Chardou on Facebook:
https://www.facebook.com/Selene.Chardou.AND.Elle.Chardou


﻿
Posted by RomFan Reviews at 8:00 AM
Email ThisBlogThis!Share to TwitterShare to FacebookShare to Pinterest
Labels: Blog Tour