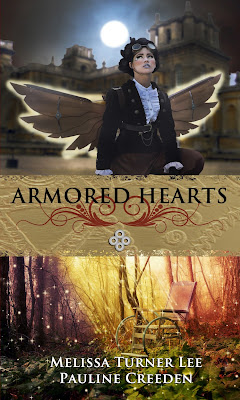 When a crippled young lord rescues a girl falling from a tree, it reveals a secret about himself and his mother's side of the family that could put him at the center of a war with beings he thought only existed in fairy tales.
Tristan Gareth Smyth lived his entire life stuck at home at Waverly Park and left behind while his Grandfather makes trips to London, all because of his blasted wheelchair.
Then an American heiress falls in his lap, literally, and he must find a way to keep her at a distance to protect not only his secret, but everyone around him from an assassin sent to kill him.


RomFan Reviews has read the book, and here's what we had to say:

This story will grab a hold of your attention and run it through the emotional ringer. You will love to hate Gareth….initially. An amazing blend of steampunk/sci-fi and romance, the authors have created an enchanting word for us to visit.  The characters have depth that will make you love them.

In simple language, Pauline Creeden breaks down Biblical stories and applies them to real life in new ways. Her methods of teaching have brought new light to old scriptures. In her fiction, she creates worlds that are both familiar and strange, often pulling the veil between dimensions. She becomes the main character in each of her stories, and because she has ADD, she will get bored if she pretends to be one person for too long.

Pauline is horse trainer from Virginia, but writing is her therapy.

She is the Admin for Spirit Filled Kindle and an administrator for Readers' Realm. Her articles, reviews, and devotionals have been featured in RUBY FOR WOMEN Magazine,Devotionals for Bloggers, Faith Filled Family Magazine, and Christian Fiction Book Reviews.

One of Pauline's short stories has won the CCW Short Story contest. Other short stories have been published in Fear & Trembling Magazine, Obsidian River and Avenir Eclectia. An urban fantasy short will appear in The Book of Sylvari: An Anthology of Elves from Port Yonder Press, and a vampire short will appear in Monsters! from Diminished Media Group. She is currently editing and drafting several novels at various stages. 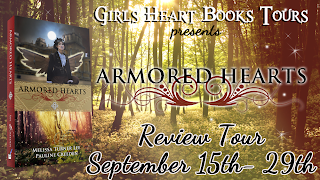 a Rafflecopter giveaway
Posted by RomFan Reviews at 8:00 AM
Email ThisBlogThis!Share to TwitterShare to FacebookShare to Pinterest
Labels: Blog Tour