7-Day Blitz for Against the Ropes by Sarah Castille: Day 3

Sarah Castille is celebrating the release of AGAINST THE ROPES with a SEVEN day party.  SEVEN great giveaways, SEVEN different posts.  Stop by all the amazing blogs participating in the party to increase your chances to win!!! Each blog will post a special AGAINST THE ROPES post all seven days (no weekend posts)


2. He won his first fight at the age of four and didn’t have to eat his spinach.


3. He has never once worn a pair of “tighty whiteys”.


4. He sleeps in flagrante delicto 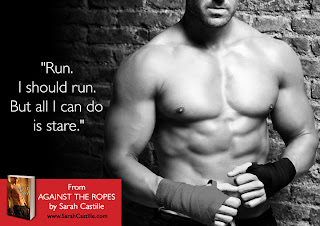 
He scared me. He thrilled me. And after one touch, all I could think about was getting more…


Makayla never thought she’d set foot in an underground mixed-martial arts club. But if anyone needs a medic on hand, it’s these guys. Trouble is, at her first sight of the club’s owner she’s the one feeling breathless.


The man they call Torment is all sleek muscle and restrained power. Whether it’s in the ring or in the bedroom, he knows exactly when a soft touch is required and when to launch a full-on assault. He always knows just how far he can push. And he’s about to tempt Makayla in ways she never imagined…

Recovering lawyer, karate practitioner, and caffeine addict, Sarah Castille worked and traveled abroad before trading her briefcase and stilettos for a handful of magic beans and a home near the Canadian Rockies. Her steamy, contemporary romantic tales feature blazingly hot alpha heroes and the women who tame them.


Against the Ropes water bottle


Kindle copy of Fight Club: A Novel by Chuck Palahniuk


Keep Calm and Fight On T-shirt


AGAINST THE ROPES bracelet