RomFan Reviews would like to welcome author Gerilyn Marin.  She was kind enough to answer a few questions about herself and her literary life.  Buried is on sale currently on Amazon for $.99 until 7/25, so head on over and add it to your library. 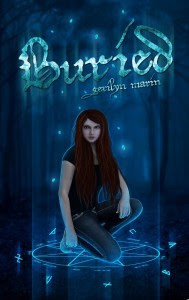 Cadence McKenna knows her town is, well, odd. And yet, residents are accustomed to the near-daily supernatural happenings. When Gray Addison moves to Fane's Cove and stays, she is shocked to find that she's the only one who believes there must be something strange about him. With her life-long - if minor - psychic sensitivity, she knows that what she feels isn't simple paranoia. After all, how many normal guys pay no mind to poltergeist activity occurring right in front of them?  Cadence can't dismiss her feelings until she understands why he's in Fane's Cove. Even if it means sticking her neck out by getting close to him... and learning more about her town's history than anyone would ever want to know.


How would your friends describe you?

Snarky, supportive... Always available to provide spooky inspiration. Maybe a little too big-hearted? I'm one of those people who can't watch the news 'cause I will cry myself to sleep over reports involving children getting hurt.

I'm really not sure. Not to sound modest, but I don't really consider myself interesting. I think maybe that I studied martial arts as a teenager?  Like, hardcore, 5 nights a week training. I spent my late teens frequenting areas here in New York City that some might consider iconic- St. Mark's place, a goth-industrial club from back in the day called The Bank, Washington Square Park, Tompkins Squarw Park.  Sometimes, my friend Fabi and I would stay out so late dancing that my shoes would be hurting my feet, so I'd take them off and walk through the streets of Greenwich Village barefoot to get back to our Chelsea apartment.

I think they might like that I write paranormal romance because I whole-heartedly believe that supernatural phenomena is possible.

I would say LJ Smith, author of the original The Vampire Diaries & The Secret Circle books. I loved her work while I was growing up.  I read quite a bit, but as far as influencing my writing, hers is the only name that comes to mind. She had this way of making the love and the supernatural equally important to the story and the events.

They love it. I have not had the misfortune of having anyone in my life tell me that I couldn't do this.

What is your favorite thing about being a romance writer?

Making the connection between the characters. Taking these two people, who otherwise might never have crossed paths, and who seemingly may not fit together at all, and bringing them together in a way that not only doesn't change who they are, but actually makes sense, actually brings the reader to understand just how well these two really do fit into one another's lives.

I really only read paranormal romance & urban fantasy. I can't help it - if a story doesn't have a paranormal aspect to it, then I will lose interest.

At the moment, I would say "Edge of the Earth," by 30 Seconds to Mars. It's not so much about my life in this very second, so much as this feeling I've had lately that something 'big' is coming.

If you could be a paranormal creature, which one would you be?

Some type of were-cat. I have a natural affinity for felines & they've always been my favorite. 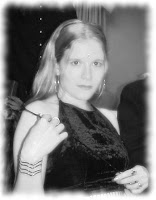 Gerilyn Marin is a self-proclaimed gothic tree-hugger, currently residing in the same small town where she grew up with her husband & 4 children. She is fascinated by paranormal phenomena & ancient cultures, and has received several awards and nominations for her writing. When not tapping away at the keyboard, or being yelled for by small people, Gerilyn spends time shying away from the sun, staring dreamily at pictures of supposedly haunted houses and deciding what color she'll next use to torture her hair.
Posted by RomFan Reviews at 8:00 AM
Email ThisBlogThis!Share to TwitterShare to FacebookShare to Pinterest
Labels: Blog Tour