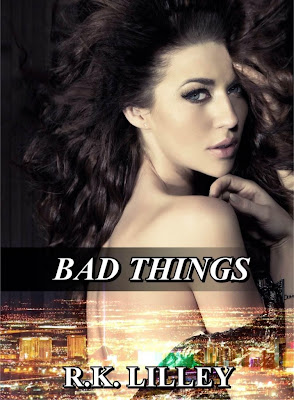 
Danika hasn’t had an easy life. Being insanely attracted to bad boys has never helped make it easier.

One look at Tristan, and every brain cell she possessed went up in smoke. This man was trouble with a capital T. It was a given.
She knew better. Bad boys were bad. Especially for her. Considering her history, it was crazy to think otherwise. So why did crazy have to feel so damn fine?

For as long as she could remember, Danika had been focused on the future with single-minded purpose. Tristan came along and taught her everything there was to know about letting go, and living in the present. She fell, hard and deep. Of course, that only made her impact with the ground that much more devastating.

“I have an idea,” Tristan said, moving around the kitchen counter, and into the dining room.

He opened up a drawer of the desk that ran along the far wall.
“That sounds ominous,” I said, following him.
“On a scale of one to ten, how much do you like the last guy that you slept with?” Tristan asked me with an arched brow and a crooked smile, flashing those dimples at me.  He used those things like a weapon.
“My ex?  Negative five, since I’m feeling mellow right now,” I said instantly.
He nodded.  “Exactly.  The last girl I hooked up with threw a drink at another chick for smiling at me, and the one before that started nagging me about my drinking after we’d hooked up one time.  Sex turns women into nagging psychos, and it turns men into straight-up assholes.  Now, how much do you like me?”
I wrinkled my nose at him.  “Right this second?  Well, this little speech is kind of annoying but I do kind of like you most of the time.  I’ll give you a solid five.”
He just grinned, not at all offended.  I don’t think he would have known what to do with me if I wasn’t giving him shit.  “Well, I give you a ten, which averages our friendship out to a solid seven, making you one of my favorite people of all time.  I’d like to maintain our average, so I say we make a list.”
He had actually gotten a pen and paper out, and I made sure he saw me roll my eyes.
His grin just widened.  “That’s what I love most about you.  I never have to wonder what you’re thinking.  It’s all right there on your lovely face.”
My scowl just deepened as I saw what he was writing.

I sighed loudly.  “What is the point of this?  We don’t need to write it down.”
He straightened, giving me a look that made things low in my body clench in the most delicious way.  His gaze was borderline obscene as he eyed me, top to bottom.
He swallowed hard.  “I need to.  God, Danika, even your feet are fucking sexy to me, and I like you too fucking much to screw it up.  I want to be around you.  I’d be sad if you we didn’t see each other anymore, and I’m batting zero at the relationship thing.  I’m a good friend, though, so yeah, I need a real clear ‘don’t’ list, so I don’t screw it up.”
I smirked at him.  “My feet, huh?  My feet are really that sexy?  You crazy horn-dog.”
I didn’t want a relationship with him, either.  I knew that it would mean the end of us as friends, but knowing that he found me that sexy made me warm all over.  It didn’t make me feel dirty to have him look at me like that, it made me feel special.  It was a novelty for me, to be sure.
He laughed and nodded, giving me really good eye contact.  “Yes.  It’s a problem.  I’m a man-whore, and you would tempt a saint.  Let’s find a way to keep our friendship safe.”
I liked that, liked that he valued my company more than my body.  I nodded, finally giving him smile for smile.  “Yes.  That makes sense.  Sex isn’t worth it anyway.  It never leaves me with anything but a need for a date with my vibrator, and that’s if I’m lucky.”
He groaned and slapped his forehead.  “I need to get that image out of my head.  That was cruel.  Do you mean that your last boyfriend didn’t make sure you got off?”  He asked the question like he just couldn’t help himself.  I knew him well enough to know that he couldn’t.
I laughed, trying not to make it sound as bitter as it actually was.  “No.  I’m saying that none of them did.  They couldn’t find a clit with a map.  Selfish pricks.”
He ran a hand over his face, and it went a little slack before he looked at me again.  “That hurts me deep in my soul, Danika.  I wouldn’t do that to you.  I’d make sure you came, first and last.  I’d go down on you every time, if that’s what you like.  I’d lick—“
I held up a hand, giving him an arch look, though I was far from unaffected by his little speech.  I wanted badly to see if he was really that good, but I shook myself out of it.
He grimaced.  “Sorry, sorry.  That was out of line.  You can’t tell me stuff like that.  It makes me want to punch somebody and, well, do things to you that do not need to be spoken out loud.  But it does prove my point about me needing a ‘don’t’ list.”
I nodded.  It was becoming apparent that we both needed one.  “Yes.  Don’t you worry about poor old me.  I like my vibrator just fine.  Better than any cock that’s ever come near me, in fact.”
He closed his eyes, lowered his head, and held up one finger as though he needed a moment.
I giggled, because I had been trying to torment him, and I saw by the oversized bulge in his jeans that I’d succeeded.
I snapped my fingers at him.  “Okay, okay, let’s get on with it.  Get started with your list.”

“No getting off and thinking about you?” I asked.  Yes, I was trying to torment him.
He held up that finger that made me giggle again.  He looked like he was thinking hard for a long moment, finally shaking his head.  “Nope.  Can’t do that.  Sorry.  It’s like saying I won’t get hard when I see you wearing a bikini.  It would just be a lie.  But I won’t torture you with the details, I swear.”
I nodded, still smiling.  Teasing just never got old with him.  He made it so much fun.  He made absolutely everything fun.  “The same,” I told him.  “I’ll try not to be too loud when I cry out your name as I get myself off.”
He shook his head, looking pained.  “So jacked up,” he muttered under his breath.
After a long pause, he started writing again without another word.

2. No getting jealous or complaining about who the other one is dating or hooking up with.

“That goes for you too, right?” I asked archly.  “No hitting guys in bars for looking at me funny.”
“I didn’t hit him.  I just choked him a little.”
“Um, yeah, that sounds worse than punching.  Not helping your argument.”
He completely ignored that, writing.

3. We can hang out whenever we want, but we won’t call it a date, even if we’re doing date-like things

“Would oral be considered date-like?” I asked, just messing with him, as usual.  I’d never been able to have sexual banter with a man that didn’t end up making me feel like shit.  It was just the opposite with Tristan.  For some reason, it made me feel warm and fuzzy every time.
He sent me a twisted grin.  “I’m pretty sure that would be breaking the no kissing rule.”
“Pretty sure leaves wiggle room.”
He gave me a look that could only be described as longing.  “I do love the way you wiggle.”
I giggled.
He went back to writing.

“That counts for you, too.  No telling me when I’ve had too many shots.  That’s for me to decide.”
He sent me an exasperated look.  “Well, if you drink enough shots that you climb on the bar to dance, and some guy grabs you, don’t nag me for beating the shit out of him.”
“That sounds like a clear violation of rule number,” I pointed out.
“That’s not jealousy.  That’s me being protective of my buddy.”
I rolled my eyes.  It was a fine line.
He started writing again.

5. Always remember that we like each other too much to sleep together, and that sleeping together will ruin EVERYTHING.

6.  If the words ‘I love you’ are ever mentioned, it will be assumed that it is in a friendship type context.

He sighed, immediately crossing #7 out.

“That one is just no fun at all,” he explained.
I giggled.  Only Tristan could make me giggle.
He sent me a warm smile.
“I named my vibrator after you,” I told him with a smirk.  “He’s small, but he makes up for it by working hard.”
He straightened, moving a little close to show me just how small he wasn’t.  I backed up to the edge of the table, and he followed.
He gave me his sinful smile.  “I’m big like this everywhere.  Don’t make me prove it to you.”
I rolled my eyes.  “Every guy says that.  It would be refreshing to meet a guy that just admitted to being average-sized, or God forbid, small.”
He shook his head.  “You want me to do something crazy.  I see your game now.  Not falling for it.”
I couldn’t hold back a smile, because I had been egging him on.  The man was so outrageous, he’d do anything on a dare.  I shrugged.  “I’ll never know, but in my imagination it’s very clearly average, bordering on small.  No way to change it.”
He pursed his lips, his fingers going to the button on his jeans.
I slapped my hands over my eyes, running away and giggling like a kid.
He overtook me in seconds, picking me up easily.  He flung me over his shoulder, heading to the back door.
I knew where this was leading.
“Put me down!” I screeched between giggles.  “I just washed my hair!”
“Every time you make me want to pull my dick out for you, for any reason, I’m throwing you in the pool.  This is for the sake of our friendship, Danika.”
I was already flying through the air before he’d finished talking.  I heard him say Danika right before my head went under.
The bastard.  A quote from Danika not long after...
“It wasn’t a don’t list, you douche bag!  It may as well have been a fucking to-do list!”

Contest
R.K. Lilley is giving away five books on this blog tour.  To enter for a chance to win, click on a Rafflecopter giveaway.
Posted by RomFan Reviews at 8:00 AM
Email ThisBlogThis!Share to TwitterShare to FacebookShare to Pinterest
Labels: Contests, Guest Blog