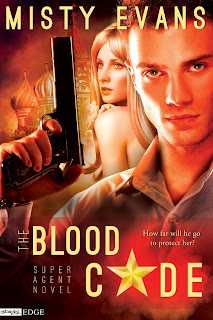 Oscar Wilde once wrote: “The only way to get rid of a temptation is to yield to it.”

It’s the beginning of summer. I’m craving tall glasses of iced tea, the beach, and dark chocolate (okay, I crave that all the time). Long summer days equate to a summer reading TBR pile of romance, humor, gutsy heroines and damaged heroes. Characters who are tempted to break the rules and walk on the wild side. Characters who crave each other’s presence, and finally, against their better judgment, give in to temptation.

According to psychologists and other ‘experts’, women crave romance while men crave sex. A recent article in Psychology Today asserted that some men crave romance, too…they just don’t have a clue as to how women like their romance served (and it’s all about us, right?) Wine and roses? Opening doors? Compliments? Grand gestures or small, intimate ones? What is it, exactly, that women crave in romance?

In my new sexy spy thriller, THE BLOOD CODE, my heroine is a lost Russian princess with a dark past and so many secrets – including her real identity – that the only thing Anya craves is a normal life. But because of her royal blood, and a defect in it, she can never be normal.

Ryan, my CIA operative, isn’t normal either. He’s a super agent, and the director of spies in Europe. His life is full of undercover work, lies, and secrets. Dangerous secrets. When he meets Anya, he can’t decide if she’s a damsel in distress or a double agent…and he’s not one to trust easily. He’s been on his own for so long, he craves a woman he can trust with all his dangerous secrets:

“I’m an American,” she whispered. “I was told the CIA could help me. You would help me.”
She knew he was CIA? What the hell?
Ryan dropped his hands, and before he could ask another question, she tipped, falling face forward. Right smack into him.
He caught her before her knees hit the floor, but she was dead weight. Getting both arms under her body, he lifted her like she was a bride. Her short fur coat—as useless as her dress and shoes in the current winter conditions—fell open, and the action fired up his already pounding pulse.
In the space of a heartbeat, the analytical compartment of his mind logged her flawless skin, slender neck, and luscious curves the coat had hidden. Breathtakingly beautiful.
And then his gaze froze and his brain stuttered.
The shit just kept coming.
Above her left hip, a red stain, darker than the red of the dress, was spreading under the silk.
She blinked once, twice, trying to focus, and half smiled up at him. Not saying a word, she slipped her fingers into the deep V-neck of her dress that showed off her cleavage to perfection.
Immediately, Josh stepped to Ryan’s side, gun drawn, as if he expected her to pull a weapon. What she slowly inched out of her bra was a weapon of sorts, but not one Ryan ever expected to see.
The shiny metal object swayed under his nose as she showed it to him. “Proof,” she mumbled, pressing it to his chest.
Even through his heavy knit sweater, the touch of the thing made his skin crawl. He frowned down into her eyes, searching their now cloudy depths. “Where the hell did you get that?”
In answer, her eyes, so pale blue they were ice-like, fluttered closed once more, and her body went completely limp, the key sliding back into her palm.
His shit meter went sonic.
Josh cleared his throat. “Jesus, is that what I think it is?”
Ryan nodded and took a deep breath, staring at the oversized key. It wasn’t just any key.
In the slim hand of the beauty in his arms lay a titanium launch key to an Intercontinental Ballistic Missile. A weapon of mass destruction.

And so their romance begins, rocky and mysterious, and heart-breaking at times, but balanced out with a love that grows so fierce, you have no doubt these two were meant to be together. Their romance is more blood and sacrifice than wine and roses, but in the end, they’ll find their happy ending.

So tell me, how did you finish the sentence? What do you crave? And how do you like your romance?

She has short stories in Entangled, A Paranormal Anthology, and Every Witch Way But Wicked. All proceeds from Entangled go to the Breast Cancer Research Foundation and all proceeds for EWWBW go to Nathon Fillion’s Kids Need To Read charity.

Misty likes her coffee black, her conspiracy stories juicy, and her wicked characters dressed in couture. When not reading or writing, she enjoys hanging out with her husband of twenty-two years and their twin sons. Learn more and sign up for her newsletter at www.readmistyevans.com. Like her author page on Facebook or follow her on Twitter.

Blurb for THE BLOOD CODE:
Fifteen years ago, Anya Radzoya fled Russia with her grandmother after the suspicious deaths of her parents, but she can’t escape the royal genes that make her one of Russia’s last living princesses. When President Ivanov blackmails her into returning to Moscow in exchange for her grandmother’s life, Anya discovers he’s planning to unleash a nuclear war. With no one else to turn to, she joins forces with CIA operative Ryan Smith.

Undercover at the nuclear summit, Ryan recruits Anya to find proof Ivanov is resurrecting the Cold War, but he suspects his new asset is a double agent. Anya is determined to rescue her grandmother with or without his help, however, and Ryan finds himself falling for the beautiful princess before he even trusts her.

Trapped inside the Kremlin with a cunning and ruthless opponent, the two must risk their lives and their hearts to save Anya’s grandmother as well as millions of innocent people.

THE BLOOD CODE Blog Tour is full of interviews, guest posts, spy quizzes and giveaways! One lucky reader will receive a princess-cut tennis bracelet and twelve others will win tiara keychains (limited to US and Canada). But that's not all, three international winners will be selected to receive a free ebook copy of THE BLOOD CODE, and an ebook copy from any of Misty’s super agent backlist books. 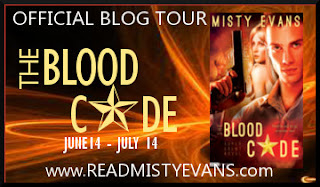 Posted by RomFan Reviews at 9:42 AM
Email ThisBlogThis!Share to TwitterShare to FacebookShare to Pinterest
Labels: Contests, Guest Blog