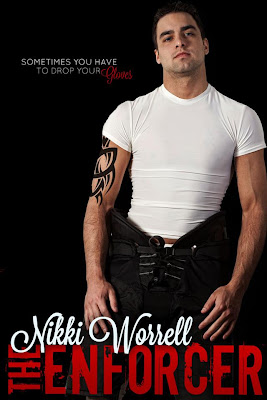 The Enforcer
NHL Scorpions #1
by: Nikki Worrell
Released: May 2013

Lacey Benoit is in need of a fresh start. Her best friend, Dr. Zoe Millis, has been begging her to make the move from Maine to California. Taking a leap of faith, Lacey does just that.

Living in San Diego definitely has its perks, such as, sunshine and beaches. The best part of moving to the west coast, however, is that Steven is still on the east coast. Catching your almost husband having sex with one of your bridesmaids on your wedding day would make even the strongest woman jaded. Therefore, Lacey has sworn off men for a while, especially men who travel a lot that have easy access to loose women.

When Lacey meets the new enforcer for the San Diego Scorpions, she thinks she might be in trouble. But she is determined to fight her attraction to the sexy NHL hunk. And she is successful...for about a day.


Teaser #2 for The Enforcer

He was due to get home around four o’clock and Lacey wanted to be at his house when he did. A home-made meal never tasted better than after eating out for days on end. At least Lacey thought so, and she was going to cook for Jody. He said he liked spicy, so she was cooking a Mexican dinner.

She had just put the chicken in the oven when she heard the door open. “Lace? Where are you? I’m so glad to be home.”

“Follow your nose!” She heard him put his travel bag down. Footsteps fell on the tile as he came closer to her, and then he was standing in front of her. “I missed you. I’m glad you’re back.”

Lacey launched herself into his arms, burying her face in his neck. That’s when she caught the scent. A feminine scent. Not quite perfume, but feminine all the same. Oh god, oh god, oh god. No, please no, not Jody too.

Jody felt Lacey stiffen immediately. He pulled her away and looked into her eyes. Her eyes were shiny with unshed tears, but they also held anger. “Hey, what’s wrong, Angel?”

“I can’t believe it. Aw, Jody, not you. How? How could you do this to me?” Lacey was mortified when a sob escaped her. She covered her face and turned away from him.
“Lace, sweetheart, what are you talking about?” He tried to put his arms around her but she whirled around and shoved him away.
She was incredibly sad, but she was also getting pissed. “You forgot to shower, sweetheart. I can smell her on you. I can smell her scent on your skin.”

I am a hockey fan (Go Flyers!) who loves to read. And now I am enjoying writing. What do I write about? Hockey and men. Really, is there anything better?  I live in Hammonton, NJ with my husband of over 18 years. It's not always easy but it's always worth it.  I have a B.S.B.A. in Human Resources and work for a law firm in Philadelphia.

Favorite Books: Pretty much anything with strong characters. I also love some supernatural thrown in and anything that involves a hockey player!


Click here to enter a Rafflecopter giveaway. Additionally, RomFan Reviews will be giving away one copy of the ebook The Enforcer to one person.  Please email contests@romfanreviews.com with your current email address and we'll draw a winner on Saturday, June 29th at noon and announce it on our site.  Good luck!