Today RomFan Reviews is pleased to be part of Donna Grant's blog tour celebrating her two new releases for June and July, Midnight's Kiss and Midnight's Captive.  In honor of the event, we get to share an excerpt from Midnight's Captive, give you a bio of Charon, and get to hear how Donna gets inspired to write.  So without further ado, let's begin by getting to know Charon. 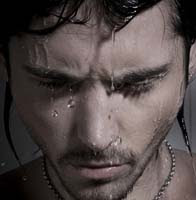 Charon
(Charon pronounced: K-AR-on)
The shrewd one. Forced to betray fellow Warriors by Deirdre. He has a life that’s been waiting for him, and he intends to have it. The fate of the world be damned.
Born: February 1365
Turned: 1390
God: Ranmond, God of war
Warrior Color: Copper
Abilities: Disintegration of objects

Dr. Veronica Reid is a world-renowned archeologist whose Druid abilities help her to unearth ancient magical items. The arrival of the all-too-attractive and charismatic Arran MacCarrick puts her on the defensive when he begins to question how she really finds her artifacts…until an unknown foe attacks and Ronnie discovers that Arran has a secret as great as her own. Together, they unleash an all-consuming passion that won’t be denied…
Immortal Warrior Arran is on a mission to find the spell to bind the god within him. But one look at the impossibly beautiful Ronnie and he knows there is more to her than meets the eye. With danger lurking around every corner and an undeniable hunger that grows with every kiss, Arran must reveal who he is to keep Ronnie from his nemesis. Now he is left with no choice but to fight—or fall—for the woman he loves…

Laura Black knows her boss is a man of many secrets—haunted by some unknowable force, driven by some unspeakable destiny—and yet it makes her crave the devilishly handsome, roguishly charming Charon all the more.  When she uncovers a betrayal that will send her into a world of magic, she turns to the only one she trusts – Charon.  Even when she’s in jeopardy of losing her heart…

Charon Bruce endures a relentless yearning to have Laura for his own, an ache he knows will never be fulfilled.  After the town he has protected for centuries is targeted by a ruthless Druid, he has no choice but to reveal his secret to Laura.  He must fight the deadliest foe he’s ever known if he’s to keep her safe.  But when Laura is captured by his nemesis, he must choose between winning the battle of good verses evil – or losing the woman he loves…


Here's the excerpt from Midnight's Captive:

Charon picked up the shirt and turned to where a carafe sat on the table. Steam still drifted through the space in the lid.  He bent to retrieve it, and found his gaze locked on Laura.
Her eyes were closed as she swayed enticingly to the music. He had wanted her from the first moment she walked into the pub and asked him for a pint of ale.
He figured with her English accent she was just a tourist passing through as everyone did, but when she had asked for his help in locating a room, he knew she had seen the beauty of the town as he did.
The next day he learned she was looking for work. Two years later and Charon still didn’t know what had brought her to Ferness.
She didn’t pry into his life, and he didn’t pry into hers.  Even though he was insanely curious at times. Especially when she would look at a locket she kept in her purse.
Suddenly, Laura stopped and opened her eyes. Their gazes locked, and as always, Charon found himself arrested by the pale green orbs that stared at him.
It was a good thing she wasn’t a Druid or Charon might give into his desires. With every Warrior at MacLeod Castle finding their mates with Druids it was difficult not to think about it.
But he was better off alone. Not to mention, no matter how hard he tried to feel any kind of magic around Laura, there was none.
She wasn’t a Druid, and he had seen enough death in his long life. Not even the lust that burned through his veins could change his mind and have him slack his body with hers.
He knew it would be glorious to have her in his arms, to taste her kisses, and hear her cries of ecstasy, but he couldn’t stand to lose one more person in his life.
So, whatever pleasure he might find in her arms, would have to be forgotten.
The glass door slid open and she greeted him with a soft smile he’d come to expect. “I was getting worried.”
Charon glanced at the deck. How much longer would she worry about him? There would come a time he would have to leave Ferness behind forever. The people he knew, the friends he had would stop thinking of him, and he would fade to nothing.
Maybe that’s why Phelan didn’t put down roots anywhere and why the other Warriors kept hidden at MacLeod Castle.
He thought he was doing something good for himself. In reality, he’d only made things more difficult.  At one time things had been so easy, so uncomplicated.  Where had it all gone wrong?

Authors get asked this a lot, especially when we’re writing a series that has several couples in it. After a 14 book series (Dark Sword 6 and Dark Warriors 8.5), it does become difficult to make sure each hero and heroine are different than the previous ones.

I’m not sure I have a certain way I do it. I just think of things I notice about people. Small things like being athletic and working out a lot, city girls, women who know how to take care of themselves in the wild, and hundreds of different things in between.

The men are more difficult. They all have to be alphas, they all have to be hot (of course, right? J ). It comes to little things with them as well. Sometimes its something that happens in their youth that leaves a mental scar, or something like a hero who loves to bake. They can all kick ass, but I like surprising readers with something they might not expect of an alpha hero.

In MIDNIGHT’S CAPTIVE, Charon who is an immortal Highlander with a primeval god inside him has made it his duty to protect the village he was born in. For hundreds of years he has bought up land, began businesses, and made sure everyone living in the village was taken care of.

He protects the people not only from the unknown evil they know nothing about in the form of paranormal creatures and evil Druids, but from known evil like companies who would destroy the forest and loch around the village. He is a protector in the primitive sense of the word. And he takes his responsibility seriously.

His heroine, Laura, is just trying to find her way in the world after escaping a family who had complete control over her. She has no idea of his true identity, but she is loyal. She’s dependable, responsible, and dedicated. It’s those traits that will have her remain by Charon’s side and learn of the magical world he lives in – and just how she fits in it.

Donna Grant is the New York Times and USA Today bestselling author of more than forty novels and novellas spanning multiple genres of romance.  She was born and raised in Texas but loves to travel. Her adventures have taken her throughout the United States as well as to Jamaica, Mexico, and Scotland. Growing up on the Texas/Louisiana border, Donna’s Cajun side of the family taught her the “spicy” side of life while her Texas roots gave her two-steppin’ and bareback riding.  Her childhood dream was to become a professional ballet dancer and study under the amazing Mikhail Baryshnikov.  Though she never got to meet Baryshnikov, she did make it to New York City and performed in the Macy’s Thanksgiving Day Parade. Later, Donna’s love of the romance genre and the constant stories running through her head prompted her to sit down and write her first book. Once that book was completed, there was no turning back.  Donna sold her first book in November 2005 while displaced from Hurricane Rita, a storm that destroyed portions of the Texas Gulf Coast. Since then, Donna has sold novels and novellas to both electronic and print publishers.  Her books include several complete series such as Druids Glen, The Shields, Royal Chronicles, Sisters of Magic, Dark Sword, Dark Warriors, and her new series, Dark Kings.  Despite the deadlines and her voracious reading, Donna still manages to keep up with her two young children, four cats, three fish, and one long haired Chihuahua. She’s blessed with a proud, supportive husband who loves to read and travel as much as she does. 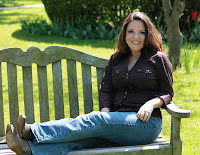 Donna has offered to give away a tote bag, water bottle & signed copy of MIDNIGHT'S WARRIOR to one lucky person.  To enter, please leave your email address in the comments, and we'll draw a winner on Sunday, June 30th at noon EST.  Good luck!
Posted by RomFan Reviews at 12:30 PM
Email ThisBlogThis!Share to TwitterShare to FacebookShare to Pinterest
Labels: Blog Tour, Contests