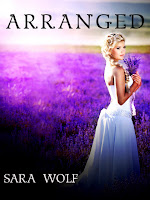 Blurb
When Rose Jensen’s grandfather dies, he leaves her enough money to save her parents’ failing business and get her through UCLA. The only catch – she has to marry Lee Montenegro, the infuriating half-Spanish, all-playboy transfer. Rose and Lee’s grandfathers were fast friends, and betrothed their grandchildren to each other.

Lee wants the money to run from his suffocating family, and turns his full burning charisma on Rose, but she won’t give in. She’ll never marry someone she doesn't love, and who doesn't love her. But memories of a mysterious boy in her childhood haunt her, and Lee insists they know each other. With her parent’s pressures mounting, her scholarship slipping, and Lee’s advances heating up with more than just money-lust, Rose is torn between doing the right thing for her family, and doing the right thing for her heart.

**This story contains language and sexual scenes, some of which may be unsuitable for younger readers.

**This is the first book in the ARRANGED series.

Sara Wolf is a romance author who, in-between wrangling a husband and a parakeet, inhales a lot of chai tea and gardens (badly!!). She's a huge fan of Vampire Diaries, angsty love, and all kinds of chocolate. She works as a internet marketer in the day, but she'd much rather be writing tortured heroes at night. 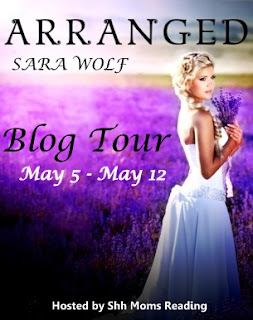 Review: Arranged
By: Sara Wolf
Price: $2.99 eBook
Genre: Romance, Angst
Release Date: March 15, 2013
Whoa! Arranged was an emotional journey that as a reader I got to accompany Rose Jensen as she learns about life, love and trust.  College life consists of books and studies with an occasional frat party with her dorm roommate.  Rose is a pretty girl in a simple sort of way, but when she meets Lee everything changes.
Two dead grandpa’s scheme to marry their grandchildren through an arrangement in their wills, but will the two of them fall in love and inherit what’s there’s?  Lee Montenegro has loved Rose since they were children.  Too bad an accident has clouded her memories of their time together.  Rose has never had a boyfriend, so Lee’s pursuit is totally foreign and has to learn how to be in a relationship.  His reputation with the ladies is well known, but when he finds Rose he knows that she is it for him until a jealous ex-girlfriend tears them apart.  With financial woes smothering Roses’ family, she believes the lies and shatters Lee’s soul.   Lee will make the ultimate sacrifice for Rose, and hopes she will remember his love.
I was so knotted up and turned inside out by the end of this story that my chest hurt …..until I realized that there is a sequel.  The second half of this story had me hanging on every word.  I just had to know how it was all going to end only to find out that it wasn’t the end…..YET! Totally loved this book and anxiously await Disarranged, it’s sequel.

Posted by RomFan Reviews at 10:17 AM
Email ThisBlogThis!Share to TwitterShare to FacebookShare to Pinterest
Labels: Blog Tour, Contemporary Romance Review