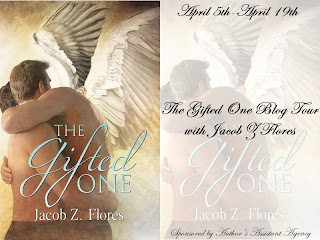 Today we have my friend Jacob Z. Flores with us and he is giving us a look into his new release, available today as a matter of fact, The Gifted One and how the story came about.  I now turn the keyboard over to Jacob.


Howdy, everyone! My name is Jacob Z. Flores, and I’m thrilled to be back at RomFan Reviews again. So many things have changed around here since my last visit. I see a glass shower has replaced the stripper pole, and there’s now an open bar. Very nice! I need to stop by more often and gripe at Annette for not telling me about these changes. I mean, when wet men are introduced to the décor, it’s just common courtesy to send out some type of notification. Don’t you think?

Annette: *grabs the keyboard* Hey, I wanted it to be a surprise for you, I know how much you like surprises.

But enough pouting, I need to remember my south Texas manners and thank Annette for allowing me to write a guest post and for being the first stop on my blog tour promoting my latest release from Dreamspinner, The Gifted One, which released TODAY! WHOOHOO!
Can you tell I’m just a tad excited?

And since I’m so excited about this new release, I thought I’d talk about the subject matter of The Gifted One. It’s a paranormal romance about a man named Matt who falls in love with his guardian angel, the Archangel Gabriel.

When I told some of my friends about the book’s premise, they asked me: why paranormal? 3 wasn’t a paranormal story, and I liked that. Why switch it up? Well, the story actually came to me from a dream I had. Actually, it was more of a nightmare, and as plot bunnies often do, this novel grew from that nightmare.

That explanation was understood easily enough, but then people often wondered: why angels?

I’ve just always been drawn to the angelic figure.

Beyond my attraction, however, lies a fascination with the concept of angels. They are beings created by God and imbued with a certain measure of His divine essence. Their function is to regulate Heaven and serve as God’s intermediary in terms of affairs on the human plane. It is their ability to so freely cross the divide separating man from the divine that I find intriguing.

They are to remain pure, yet they are exposed to humanity, which is inherently impure.

I began to wonder: what happens when that purity is tainted? Will Heaven stamp out the corruption and cast it from above as it did Lucifer, the only real story I knew of an angel falling from grace? Or would anything less drastic happen?

That’s when I came upon The Book of Enoch, an apocryphal text of the Bible. The great-grandfather of Noah, Enoch wrote about a group of angels called the Watchers, who fell in love with the daughters of man. They took wives, and their offspring became the giant Nephilim. Think Goliath from David and Goliath.

As a result of the wickedness that the Watchers created, the great biblical flood occurred.

After reading that, I thought: wow! What would the heavens do if one of the angels, let’s say the Archangel Gabriel, whose bad boy attitude always made him a favorite of mine, fell in love with a man instead of a woman?

From that question, The Gifted One was born.

I’ve provided a blurb and the excerpt below for those who’d like to read them, and I also wanted everyone to know that as part of my blog tour I’m holding a contest. All you have to do is leave a comment to this post, and your name is entered to win a free electronic copy of The Gifted One. At the end of the tour, a winner will be chosen and announced.

Thanks for having me here, and I appreciate all you great readers for stopping by.

As his birthday approaches, Matthew Westlake fears more than just growing a year older. He fears never seeing another year at all. Each birthday brings a close call with death, leaving holes in his memory, recurring nightmares, and one more glimpse of his guardian angel. This birthday Matt must stand against ancient evils that have hounded him since birth, because he is a Gifted One—a seventh son of a seventh son.

Within Matt rests the unlocked potential of a force for good, but it also makes him a target. Being the Gifted One and dodging demonic attacks aren’t Matt’s only problems, though. He’s fallen in love with his protector, the Archangel Gabriel, and Heaven will condemn that love to save Matt’s soul. But Heaven doesn’t count on Gabriel loving Matt in return, defying divine law, and placing them in danger from demons and angels alike.

The minute his head hit the street, Matt’s breath left his body and stars suddenly rocketed into his field of vision. The world spun around and made him dizzy.
Rain continued to fall around him, splashing his face and getting in his mouth and nose. Each splatter of rain felt more like a slap across the face. Never before had rainfall hurt so much. It reminded him of what he sometimes did to unresponsive patients at the hospital. Gentle smacks to rouse the patient to consciousness.
The sudden sound of a car peeling toward him grabbed his attention. Even though it hurt to move, he turned his head to the left and watched as a black truck barreled down the road toward him.
He needed to get to his feet and get out of the way, but when Matt sat up, the world spun around even faster and he almost lost consciousness. He had a concussion and that meant he was going nowhere without someone to help him up.
Now only a few feet away, the truck continued toward him. Matt knew this was it. His number was up, and it was time for him to meet his maker. He just hoped his death wouldn’t break his grandmother’s heart. She had suffered enough loss in her life already.
Matt braced himself for the impact, but instead of metal slamming into him and tires crushing his bones, a blur of movement darted toward him through the rain. Someone he couldn’t see through his hazy vision lifted him off the pavement, before sidestepping the oncoming vehicle.
A flash of something bright flew from the stranger’s hands and hit the rear tires of the truck. In response, the vehicle skidded and lost control. It spun to the left before lurching forward and careening into the intersection, where an eighteen-wheeler T-boned the truck. The resulting impact caused the truck to split in half with a deafening crunch of metal.
“Good God!” Matt exclaimed as his vision cleared enough to see drivers exiting their cars in an attempt to rescue the man in the truck. It wasn’t until his feet once again touched the ground that he realized he had still been safely cradled in his savior’s arms.
Matt looked up at the man who saved him. When he saw him for the first time, his breath left him for the second time that day.
The man was stunning. His eyes looked like chipped fragments from the heavens. The radiant blue filled Matt full of awe and made him want to soar like a bird on the uplifting currents emanating from the man’s stare. Rivulets of rain fell from his jet-black, short-cropped hair, which matched the stubble that spread across his face. It made him look brooding, serious, and intimidating.
Matt, however, wasn’t fooled. Hidden behind the strong, chiseled face, that most would find unapproachable, he sensed only kindness and compassion. A rough exterior existed, no doubt. His chest was expansive, framed by massive shoulders and muscular arms. Packaged inside a black leather jacket and dark blue denim, he looked tougher than diamond, but Matt instinctively knew he had nothing to fear from this man.
He had risked his life to save him, and Matt knew he would do it again, if necessary.
“How’s your head?” the man asked. His voice sounded like a symphony.
“It hurts,” he replied. Although he forgot the pain for a few moments, the throbbing returned with a vengeance. “Good thing I’m a nurse. I know what to do.”
“I have no doubt.” The man reached up and placed his sizeable hands on each side of Matt’s head. After a few moments, the pain ebbed to a dull ache before disappearing all together.
“The pain’s gone. What did you do?”
“I did nothing,” his savior said before turning to leave as the heavens abruptly shut off the rainstorm.
“Wait a minute. Come back here.”
“Excuse me, sir, but are you okay?”
Matt turned to face a police officer. “I’m fine,” he told the officer. “But I have to go.”
“I’m afraid I can’t allow that. You need to answer some questions. And see a paramedic.” The officer glanced back across the street, where the man’s partner dealt with the accident.
“Listen, Officer Belton,” he said, reading the name on his tag. “I have to go find the man who saved me and thank him.”
Officer Belton’s eyes narrowed in concern. “The man who saved you?”
Matt nodded in reply and turned around only to find his savior had disappeared as suddenly as the rain.
“There wasn’t anyone else here, sir. I was in my patrol car across the street. I saw you fall down and the truck headed toward you. I tried to make it here as fast as I could, but you jumped out of the way at the last second. There was nobody else.”
The serious look on Officer Belton’s face told Matt that the policeman believed he was telling the truth. The problem was that Matt knew it wasn’t.
How was it possible for him to be saved by a man no one else could see?

You can buy The Gifted One here:

Become a part of Jacob Z. Flores’ social media, by visiting any of the following:

Contest:
Jacob is offering one lucky person at the end of the tour a copy of The Gifted One so make sure to enter for your chance to win. To get a complete list of where Jacob will be you can go to his website or you can also find it here http://authors-assistant-agency.com/author-appearances/blog-appearances/