Fire Horse Review and Contest by Mickie B Ashling 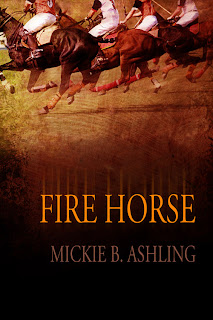 Mickie B Ashling is giving away a eBook copy of Fire Horse at each stop, so leave a comment along with your email address to be entered to win.  Winner will be chosen on Sunday, April 21st.


When a back injury during a polo match lands Preston Fawkes in the hospital with only his longtime friend, Ned Temple, by his side urging his to take time and recover, he is reminded of all his financial obligations, including two ex-wives and children who enjoy the fruits of his labor.  After an unexpected visit from his son, Conrad, Preston dreams of his son’s namesake and painful memories surface while under the effects of pain medication.


Fire Horse was a beautifully written coming of age story between Preston Fawkes and Konrad Schnell.  Their friendship is built on the grounds of love for horses and polo, but through the years deepens into something more.  With time and space separating them, absence makes their hearts grow fonder.  Finally succumbing to their passions, Konrad and Preston begin a long distance relationship that would rival the strongest of loves.  Tragedy strikes and Preston is left never knowing the truth until fate intervenes.


The author captured me within their words weaving an amazing love story between to strong men as they nurture their relationship in a time that was not as open to homosexuality.  The fire was stoked frequently between these two beautifully amazing men as they fought for what they wanted and I was caught in flames.  My only disappointment was that I wanted more…..Yes, I am greedy like that.

I stared out the window, paying little attention to the landscape which was miles and miles of steaming hot nada. August in Texas wasn’t exactly paradise, so there were no distractions from my melancholy thoughts. It never occurred to me that Konrad might change as well, but of course it was a very real possibility. I’d had his undivided attention for three years, and it would be over by the end of next week. Once we were let loose in the world, there’s was no telling what could happen.

I got a little preview of the future as soon as we drove past the great willow tree marking the entrance of the club. A small crowd of people gathered near the clubhouse, greeting players and their retinue. I assumed these were the big shots in charge of the tournament. I recognized a few faces from pictures I’d seen in polo magazines and was impressed anew. One of the greatest Texans to play the sport, Cecil Smith, now in his late seventies, was a part of the group, along with the owner of the club, Norman Brinker. They were meeting and greeting the arrivals, and when our turn came, Konrad was acknowledged with backslapping enthusiasm.

“So you’re the young man Cecil has been jawing about,” Mr. Brinker remarked. “Welcome to Willow Bend.”

“I’m glad you could make it, son,” Cecil added, joining in the conversation.

“Thank you for the opportunity, sir,” Konrad said, removing his hat respectfully and shaking the older man’s hand with the same reverence he’d have paid God. If Konrad idolized anyone it was Cecil Smith. The legendary wrangler-turned-polo- player had been instrumental in arranging for Kon’s invitation to play in this tournament.

In his prime, Cecil Smith had been a 10 goal player for twenty-six consecutive years, the highest ranking one could attain in the sport. He’d also been credited with taking polo out of the drawing room and into the bunkhouse. His glory days had marked the zenith of American Polo, and long after he’d retired in 1967, he had continued to ride and train polo ponies on his ranch out in Boerne, not too far from our San Antonio home. He was always on the lookout for homegrown talent, and Konrad had caught his eye a while back. It was always a great source of pride for Cecil whenever a local boy could stick it to the millionaires and upper-class stiffs. He had shown the world that one needn’t be a blue blood to succeed in polo. All you needed was talent, guts, and a love for the sport and the animals that were the true players. Without a good pony you were nothing.

“Go out there and make me proud, son.”

“Yes, sir…thank you, sir,” Konrad stammered, tripping over his words in embarrassment.

“This here is Pres, Mr. Smith. He’s an upcoming rider and acting as my groom today.”

“A good groom is harder to come by than a wishing well in the middle of Hill Country,” he drawled. “Are you any good, boy?”

“Tryin’ is only good in horseshoes, Pres. Grooms are the unsung heroes of polo and I would expect you to go the extra mile for your friend and his ponies. How many do you have?” he asked, turning back to Konrad.

“I understand, sir. I can’t afford them yet.”

“You show me what’s what this weekend and I’ll see what I can do about getting you another pony.”

Konrad’s mouth dropped open in shock. “I’ll do my best to make you proud, sir.”

“See that you do, boy…see that you do.” He doffed his Stetson at the two of us and walked off toward another group.

“No pressure,” I said, grinning up at him.

He let out a whoop and dragged me off toward the stables. Kon’s parents and Monica had long since taken off to check into the motel rooms they’d booked for our stay. The clubhouse accommodations were allotted to the royals and other more famous players. We nobodies had to fend for ourselves.

I craned my head in all directions, trying to spy a world-renowned figure, and I wasn’t disappointed. There was a group of men leading horses covered in red blankets with the letter H embroidered in gold. I assumed these were the Harriott horses belonging to the brothers from Argentina, some of the best players of our time.

“Can’t help it,” I said. “Isn’t that Prince Charles?” I whispered, pointing out the familiar face.

font-family: "Verdana","sans-serif"; font-size: 12.0pt; line-height: 115%; mso-highlight: white;">“Shut up, Flea,” he said, prodding me forward. We were approached by a stable hand who showed us our assigned stall and encouraged us to make use of whatever we needed. There were bales of hay and bins of feed for the taking. I stopped thinking about celebrities and got down to the business of making our horses comfortable. While I pitched hay and mixed feed, Kon went to get his pair of ponies. I imagined myself in the role of player instead of helper. One day I’d be a part of this world and people would be waiting on me instead of the reverse. I hoped that my friendship with Konrad would withstand our separation. It was the only damper on the horizon but one I tried to rationalize as necessary to my growth. Mom had promised to let me return home each summer but assured me with a knowing smile that I’d stop wanting to after a while. I doubted it. Leaving Konrad was the hardest thing I’d do in my short life. There was a part of me that wanted time to stand still, but I knew that change was inevitable.

Posted by RomFan Reviews at 10:20 AM
Email ThisBlogThis!Share to TwitterShare to FacebookShare to Pinterest
Labels: Contemporary Erotica Review, Contests, GLBT