Author Promo: Demon at my Door by Michelle A. Valentine 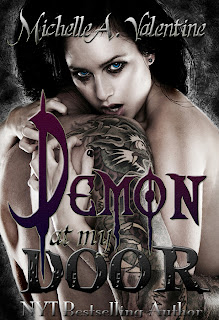 Gothic outcast Natalie Sugarman bartered her soul for her dying mother’s life sixteen years ago to a boy demon that could stop time.  Now, days before her twenty-first birthday, the lifelines on her palms are slowly vanishing, and she knows it’s just a matter of time before Satan’s little helper collects.

Natalie's tried numerous times to kill the demon and regain control of her soul’s destiny, but she always falls short. When she decides to try and gain the element of surprise for her next attempt, Natalie seeks answers about his location from a freaky, glowing-eyed fortuneteller. Creeped out by the psychic’s methods, she bolts from the reading and misses the warning that the demon who stole her soul is always closer than she thinks.

After some strange incidents with her new boyfriend, including a hot, levitating sex session, she realizes he’s the grown-up version of her little nightmare and he’s returned to collect on their deal. Natalie must figure out how to win her soul back from the demon before her lifeline completely disappears and she becomes his forever—even if that means making a deal to damn three other souls to take her place.

Represented by Jill Marsal of Marsal Lyon Literary Agency
Posted by RomFan Reviews at 8:00 AM
Email ThisBlogThis!Share to TwitterShare to FacebookShare to Pinterest
Labels: Author News