Review: The Man Who Holds the Whip by Shoshanna Evers 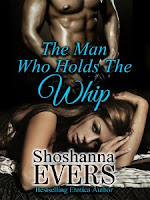 The Man Who Holds the Whip

“Is it too late to talk?  I’m drinking terrible wine. Wish you were here.”

Grace Pontaine had a grueling day as a nurse and wanted nothing more than to relax with a glass of wine and talk to her ex-boyfriend, Ian, but he broke her heart three years ago when he dumped her.  They had remained cordial with each other through text messages and that was all it would ever be according to him.  So, when Ian replies that he couldn’t continue hiding who he was, she automatically assumed that he was gay.

When Grace tells him she doesn’t understand, he sends her an internet link of a woman with him…holding a whip.  Captivated by seeing Ian again and what he was doing, she watches more videos of him and becoming more aroused.  Grace is enticed by what she sees and how she feels.  So after watching more of his videos, she decides she needs to see him and arranges for an audition.  She needs to know that the girls are there willingly and nothing more sinister is at hand.  Sinister… yes, but enjoyed by all.

As a 100+ page quick read, Shoshanna hits on a lot of key points in this story.  For example how relationships breakup out of fear of not being understood, how a small spark of interest can lead to pleasure on so many levels,  how honesty allows you to truly see the person you love.  Now don’t get me wrong the sex and kink are VERY capable of making the reader squirm (in a good way).  Grace and Ian are so real that I am sure most of us can find even some small part of ourselves in them.  For a short story, it really packs a punch!