The gracious Bianca Sommerland has chosen RomFan Reviews for the exclusive cover reveal for Offside, the next story in the Dartmouth Cobra series.  Offside is the story of Zack, Becky and Scott and is scheduled for release in April.
Bianca has chosen two, yes TWO, excerpts for us to share with her fans and I know you won't be disappointed.  With the current NHL hockey season giving her plenty of inspiration, she has chosen some amazing new prizes for her own adoring fans.\
First prize is the first three books in the Dartmouth Cobra's saga in paperback. Second prize is a $25.00 Amazon gift card. Third is a Cobra ball cap with your favorite players number to personalize it just for YOU! 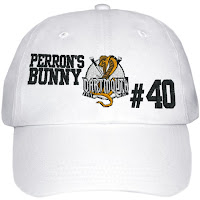 Please comment to win by Rafflecopter open to US and Canada.  The contest will run until midnight February 24th. The winner will be notified by email, so please be sure to include it.
Keep an eye on Bianca's website for more information on Offside and other Cobra news.
http://www.im-no-angel.com/

Now for the big reveal and excerpt: 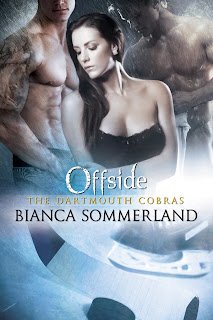 Blurb:
A pace ahead of the play can send you back to the start. And put everything you’ve worked for at risk.
Single mother and submissive Rebecca Bower abandoned her career as a sports reporter to become a media consultant with her brother’s hockey team. A failed marriage to a selfish man makes her wary of getting involved with another. Unfortunately, chemistry is hard to deny, and all her hormones are dancing when she gets close to the Cobra’s sniper, Scott Demyan.
Zachary Pearce ‘came out’ to the world last season to shift attention away from a teammate. And his one night with Scott Demyan had been unsettling. There could be more there, if only Scott was a different person. Instead, a night of sensual BDSM play with Becky leaves him wanting more, but she thinks he’s gay and questions his interest. It’s been a long time since a woman has attracted him both as a man and a Dom, and he’ll do everything in his power to prove she’s the only one he needs. Or wants.  His one time with Scott was a mistake.
Scott might have forgotten what happened in his childhood, but the effects linger, and he specializes in drunken one-night stands…until he meets Zach and Becky and sees what he’s missing.  But neither one believes Scott can be faithful.  Although he’s trying hard to clean up his act to avoid getting kicked off the team, they want more from him.  He’s willing to make changes, but the most important one—putting their happiness before his own—means he’ll probably end up alone.

Swiftly catching the ball and cradling it under her arm, Becky darted forward, heading for the trees. It took seconds for him to realize what was going on. To notice that she was the furthest from the trees. To remember the rules.
Zach took just as long, and they both reached the trees steps behind Becky. Just in time to watch her slam the ball into the dirt and do a little dance. Her cheeks were flush from the run. Her eyes sparkled. He really hadn’t pictured her as the competitive, sporty type, but there was so much he didn’t know about her.
So much he wanted to know.
“Nicely done, little doe.” Zach laughed as Becky gave him a high-five. “You’ve put us ‘pros’ to shame. I think we both underestimated you.”
“Damn right you did!” Becky laughed, twirling away from him to pick up the ball. “From what I just saw, my five year old daughter would put you both to shame. That kid has a wicked arm on her, and she didn’t get it from her father.”
Scott usually stayed away from kids. It was hard to see them, so full of life, after he’d gone to his niece’s funeral and watched that tiny coffin lowered into the cold earth. But, for some reason, he wanted to know Becky’s kid. Wanted to see her running around in the park, playing football, laughing, looking so like Becky his heart had stuttered when he first saw her. She was part of the woman he didn’t really know. The woman who didn’t hold a recorder in his face and ask questions he didn’t want to answer. The woman who smiled so brightly at him now.
He’d never really been interested in chick with kids. Something about it just seemed wrong. They were looking for daddies for their babies, and he couldn’t see himself taking on that role. He recalled a scene from the movie, Jerry Maguire. Something about not ‘shoplifting the pootie from a single mother’. He had the urge to take a full five fingered discount, but hell no. Not from Becky. His teammate’s sister. And a woman another teammate was obviously serious about. It didn’t matter how he felt about her. All he could give her was a good time.
A really good time.
No.
Becky moved a few yards away from the trees. Zach jogged to the far point. Scott hauled in a deep breath and held it in. All right. He could do this. Maybe Zach was right. Maybe it was a good test. If he could be just friends with Zach and Becky, he could do anything. The ball was tossed back and forth a few times. He focused on the game. Found himself furthest from the goal and decided to make a run for it. Dodged Zach, then Becky. Arms wrapped around his legs and he pitched face first into the grass. Rolled with the ball and a curvy body in his arms.
He roared out a laugh as Becky straddled him and tried to wrench the ball out of his grip. “You don’t expect me to just give it to you, do you?”
Sitting up, Becky batted her eyelashes sweetly. “What if I ask really nicely?”
He grinned. “I might consider.”
“Pretty please, Scott?” She leaned down and whispered in his ear. “I’m a very sore loser.”
With her lips so close to his cheek, her breath warming his flesh, he forgot his newfound morals. His dedication to the team or anything else. Her name crossed his lips in a breathless gasp. He stared into her eyes, one hand on her arm, holding her in place. “Kiss me and I’ll do anything you ask.”
She bent down. Her lips brushed his. “Kiss you? Why? It wouldn’t mean anything.”
He held his breath. Flicked his tongue over her bottom lip. “We both know that’s not true.”
Setting her teeth into his bottom lip, she tugged lightly, then jerked the ball away from him. He felt her trembling, even as she pushed to her feet. “You’re right. It does mean something.” She tossed her hair over one shoulder, squaring her shoulders as she looked down at him. “It means I have the upper hand.”

NSFW Excerpt (NOT safe for work):

Jerking Scott down onto the bed, Zach quickly rolled over him, grazing his teeth down Scott’s smooth jaw. He gave Scott a bruising kiss while undoing the jeans. Smiled against Scott’s lips at his groan. “You know what scared me? I thought you would run again. I thought you had. But you stayed.” He slid his hands between Scott’s thighs, gently massaging his heavy sack. “You had the balls to stay.”
“Shit. I want you.” Scott’s hips jutted up as Zach palmed his fully erect dick. “I told you I’d stay. Wasn’t for this.”
Zach sucked at the side of Scott’s neck, running his hand up and down Scott’s cock, his own balls swelling and pulsing with lust, his blood pounding along his hard length. ‘This’ wasn’t why he’d wanted Scott to be here when he woke up, but it was impossible to let Scott go now that he had the man in his bed. “Do you have any idea how difficult it was to hold you at arm’s length all this time? Sometimes I wished I could be like you. Fuck without caring.”
“I don’t want you to be like that. If you were, I wouldn’t love you so damn much.” Scott wrestled Zach onto his back, teeth bared, tone gruff. “It was worth the wait, but I can’t hold back anymore. Take me or I’m gonna take you.”
Sweat broke out on Zach’s flesh as he shoved Scott off him, pushing him face down on the mattress. He bit that back of Scott’s shoulder hard enough to leave a mark, then let out a harsh laugh. “Not this time.”
Fetching the lube and condoms from the night table drawer, Zach took a few deep inhales to calm himself enough to make this good for them both. Last time they’d had sex, they’d both been drinking. He wasn’t sure if Scott had ever been with anyone, man or woman, completely sober. Fast and hard would be no different than what he’d experienced so many times before.
He covered himself and climbed over Scott, sliding his lips along Scott’s spine. He rose up to squirt some lube into one hand, then pressed one finger between Scott’s ass cheeks, sliding it into him slowly. Scott shivered, letting out a muffled sound as he pressed his face into the pillows.
“So fucking hot.” Zach worked another finger in alongside the first, pumping his fingers at a steady pace as he pressed his forehead against the center of Scott’s back. The grip of Scott’s inner muscles around his fingers heightened the urge to slam his dick in to the man’s perfectly willing body, but something deep inside him held on to making this better than their first time. Zach withdrew his fingers, spread lube over his length, then slid it into the crease of Scott’s ass, one arm wrapped around Scott’s waist.
“Jesus, Zach!” Scott panted, thrusting his hips backwards. “I need you inside me.”
“I know. But one thing first.” He lowered so he covered Scott’s body completely, one hand on his own dick, the other pressed to the side of Scott’s face to turn his head for a long, slow kiss. He made sure Scott was looking at him, then whispered against his lips, “I love you too.”
* * * *

Posted by RomFan Reviews at 8:00 AM
Email ThisBlogThis!Share to TwitterShare to FacebookShare to Pinterest
Labels: Author News, Contests