Take Me, Break Me Cover Reveal and Contest with Cari Silverwood

We would like to thank Cari Silverwood for allowing RomFan Reviews the opportunity to be on the brink of something awesome with her new release, Take Me, Break Me.  This is book one of her Pierced Heart Series which shows beautiful potential with rich and complex characters.  Please enjoy the excerpt chosen by Cari to be shared with her fans as I am sure it will peak your interest. Enjoy!


Cari is also offering to one lucky person a signed PRINT copy of either Iron Dominance or Three Days of Dominance. Winner's choice. PLUS you will also receive an ARC of Take Me, Break Me.

So, should I tease you all by posting the Blurb and Excerpt first or just reveal the cover? *evil laugh*  Okay, I will be nice, here you go....... 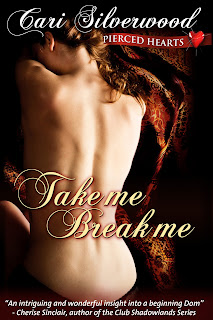 Jodie is scraping the barrel trying to stay afloat. An idea arrives that could rescue her finances and bring her together in a kinky way with a man she never gave up on. She's terrified and fascinated, and tempted as hell.

Capture fantasies rule her eBook. Re-enacting one in a documentary would surely be irresistible viewing to millions of women?

But Jodie and Klaus discover that underneath an ordinary man dark desires may lurk. What will win in the end? The man and lover, or the monster?


As I kissed and tasted the tears that had leaked from under the blindfold, I said in a harsh whisper, “I enjoyed seeing you scream and try to escape, loved seeing you dancing away from the cane. Your ass – I’d declare it a work of art. Yeah…” I touched our foreheads together and looked down over her face,stared into her blindfolded eyes, and at her trembling full lips and those amazing tears. I traced my finger down the wet track on one cheek.

My murmur was soft but as deadly, I hoped, as a knife thrust. “I never thought I’d say this, but I enjoy this. You might be in trouble.”

Truth and mind fuck rolled into one scorching bundle. Yes, she was in trouble, but then so was I.

I wanted to do it again. I’d saved her and cared for her so many times. She was a beautiful woman, with a mostly beautiful heart, and I wanted to hurt her and swallow those screams. God, I was so fucked up.

Now is your chance to enter for the great giveaway mentioned at the beginning.

India hates her job working in a brothel, but has no other choice.  When one too many customers complain of her lack of enthusiasm, Madam Rowena sends India to Phineas, an expert in sexual psychology.  Together, India is taught to turn herself into a sexually empowered woman and mysterious courtesan, schooled in the ways of the Kama Sutra.  As payment for helping her enjoy her work and find herself, she offers Phineas his deepest fantasy-making love to another man.


India hates her job, and it shows.  To avoid being thrown out of the brothel and onto the streets where she came from, India must learn to change her point of view.  Instead of being forced to be with men, she must realize that she has all the power, and remaking herself into a bold, confident, sexy mysterious woman will allow her the freedom to control the situation and love what she does.  Phineas helps with that, using his knowledge of sexual pyschology and various sexual steam-powered devices.  I was a bit bummed there weren't more crazy sexual devices, but overall it was a great short story of one woman finding herself and becoming the woman she was meant to be.  Also, the sex was amazing.

Carla gives this book a

Posted by RomFan Reviews at 8:00 AM No comments:
Email ThisBlogThis!Share to TwitterShare to FacebookShare to Pinterest
Labels: Historical Erotica Review, steampunk

Tell us a little about your upcoming See the Light which is being released February 26th.
See the Light is my first male/male story, and I’m really excited about it. It takes place in the world of professional hockey, which, of course, has no “out” gay players. That by itself was ripe fodder for conflict, but then since I love to torture my heroes, I added a bunch of other obstacles.

What made you decide to write sports related books?
Because I *love* sports. My favorite sport by a country mile is hockey, though I find bull riding to be a mix of exciting and cringe-inducing. ;-) I love the athletes that play hockey and ride bulls. They have one thing in common –for the most part, both sets of men are far more down-to-earth than athletes from other sports. I find that pretty sexy. Plus, the bodies make for a sexy hero too.


Is there anything special you do to get in the mood to write?
I wish there was, but I don’t have the luxury of stuff like that. Instead I just sit down and do it.


If I was a first time reader of your books, which one would you recommend I start with and why?
Talk to Me, my debut. I’ve been told Drew is a great hero, and it’ll ease you into the amount of sex in my books. ;-)


How long have you been a writer?
I’ve been writing for publication since 2008.


How much time did it take from writing your first book to having it published?
My first book wasn’t the one that got published first. The second one was. ;-) It was about two or two and a half years after I started writing for publication to sell Talk to Me. All in all, it was a pretty quick journey.

As a child, what did you want to be when you grew up?
Well, I went to college for psychology, but never with the intention of being a counselor. I’m far too empathetic and would be bawling like a baby listening to my patients. Instead, I wanted to do organizational development stuff.


What’s a guilty pleasure you have?
Pizza and Pepsi. I lurves them both.


What sound drives you crazy?
The church bells near my house, mostly because for some reason my daughter freaks out when she hears them.


A biography has been written about you. What do you think the title would be?
Oh no she didn’t…but she did!


Coke or Pepsi? (I know the answer to this one LOL) Wow, how predictable am I? :-P


Cassandra Carr lives in Western New York with her husband, Inspiration, and her daughter, Too Cute for Words. When not writing she enjoys watching hockey and hanging out on the computer. She has won numerous awards for her writing and had one of her books cited as a Top Pick/Recommended Read by over a dozen review sites.

Read my review of See the Light here

Posted by RomFan Reviews at 8:00 AM 3 comments:
Email ThisBlogThis!Share to TwitterShare to FacebookShare to Pinterest
Labels: Erotica Author Interview


Hockey player Jason Monroe lives a double life—star defenseman and soon-to-be Olympian on the ice and closeted gay man outside the rink. A serious relationship is out of the question, and Jason makes do with anonymous sex in barroom bathrooms, not willing to take the chance on coming out as gay in a decidedly macho sport.

Advisor to the US Olympic hockey team Patrick Parker knows a thing or two about being a professional hockey player who’s not out. He’s fifteen years older than Jason, and when he senses the sexy younger man is interested, he knows he shouldn’t give in to the attraction. The two men can’t keep their hands off each other, though, and with each heated encounter it gets harder to hide their relationship. Then their world blows up around them, forcing them into the limelight. Will their love survive or be put on ice?

I moved this book to the top of my “to review” list and had it read in one night.  It is one of those cannot put down books that you just keep reading because you have to know what happens next and will Jason and Patrick hook up and will it last.  Cassandra Carr is one of those authors that will always be on my “must have” list.