We would like to welcome to RomFan author Ethan Stone.  Please make yourself comfortable and we will jump right in since I know how busy you are.

Tell us a little about your book Subject 13.

It’s a book about redemption, second chances and government conspiracy. Luke Kincaid comes to town to stop his boyfriend from getting married. He ends up in a NSA (No Strings Attached) relationship with one man and a renewed friendship with another one. Luke has to come terms with the loss of his old love, his feelings for a new man and repressed memories returning.

I have several WIP’s at the moment. Right now I’m working on a book set in a maximum security prison. For readers who don’t know, I work at a max prison in real life. I’m trying to make it as realistic as possible and the protag is about as close to the real me as any of my other characters. I also have a story Past Tense which is about halfway done. It’s a story about a young man and his connection to a dangerous mobster and the PI the young man turns to for help. I also have another Cristian Flesh story about a quarter done. And I’ve agreed to co-write a Zombie story with Daniel Kaine that will be part of an anthology with stories by Eric Arvin and TJ Klune and Ethan Day and Geoff Knight.

I only read m/m or comic books and I love it when the two genres combine. I love mystery and thrillers. I do some beta reading for some great authors including Lara Brukz, Marie Sexton, KC Wells and Carter Quinn.

Finding time to get it done. I have a 14 year old son who is thankfully an easy going young man, but he still insists on things like eating. Additionally, my daughter and her young kids now live in the same town as me. She, her new husband, and the kids visit often and even if I wanted to write when they’re over it’s just not a possibility.

I like to have Mt. Dew when I’m writing. I also like to have something to snack on close by. Beef jerky or chips and dip usually and sometimes candy. Which is not good for my attempt at losing weight.

Total pantser. I usually know where I want to go by the end of the book and just write my way there. It’s like a crazy ass maze and sometimes I go down the wrong path and have to backtrack. I’ve tried to plot and usually can’t do it. I do like to brainstorm with friends. I like having them throw out ideas and see what sticks. They hate it because I reject most of what they offer but for me it’s about figuring out what doesn’t work before figuring out what does work.

How would your friends describe you?

Friends? Do I have any of those? My BFF Lara calls me a dork all the time. I think I’m funny but she doesn’t always get my sense of humor. I’d also like to think I’m honest and loyal and caring. But honestly, I don’t know why my friends stick around or how I end up making new friends.

Up until just recently I only worked on one project at a time. But lately I’ve ended up with three WIPs. I started the Flesh story over a year ago and then stalled on it. Then I started Past Tense and it took me approximately six months to write 25 K. I have lots of excuses as to why that happened, but I won’t go there. I’ll paraphrase what a reader jokingly said at GRL in Albuquerque. “I’m sorry you’ve had problems in your personal life, but get over it and write!” That could be about the best advice I’ve ever had.

Michael Jackson’s Beat It. Everyone Has a Dark side by Kelly Clarkson. Shiny Happy People by REM.

What sound drives you crazy?

Loud beeping. Big trucks backing up, fryers at McDonalds, smoke alarms when the batteries are low. It’s like fingernails on a chalk board for me.

Where can readers find out more about you and your books?

I’m on Facebook ALL the time and I love it when readers PM me http://www.facebook.com/ethan.stone.54?ref=ts&fref=ts. My website is www.ethanjstone.com or they can email me at ethanstone.nv@gmail.com.


Below is my official bio with Dreamspinner Press, but I wanted to do something a little more personal. Ethan Stone is not my real name, I use it because I am not out of the closet, though my family and close friends know I am gay. However, due to the community I live in and the job I have, hiding my sexuality is a necessity at this point in my life.
I am a single father with a wonderful and aggravating teenage son. I also have two cats who think it’s their job to cover my house with their hair and a Pomeranian who thinks he’s a Pitbull.
I’ve always loved to write and one point thought journalism was my dream career. I eventually accepted that writing because I had  to was nowhere near as much fun doing it because I want to.
Stories starring gay men have always been in my head but thought they would always be relegated to erotica websites.  And then I discovered the wonderful world of M/M publishing.
Relationship info: Stay tuned…
Feel free to ask me any questions. Either here or through my email: ethanstone.nv@gmail.com. If its a question I can’t or won’t answer I’ll let you know, but I’m not easily offended.
Thanks for being here and thanks for reading my stories.
–Ethan

Ethan Stone lives in Nevada. But not Reno or Las Vegas. There are other cities there, you know. Where he lives, gambling isn’t on every block, just every other block. He has been obsessed with two things in his life: books and all things gay. After spending years trying to ignore the voices in his head, he finally decided to sit down and listen to them. What he discovered was a perfect union of his two obsessions. Ethan has a day job that pays the bills. He wears a uniform to work and he looks damn sexy in it.

Luke Kincaid's life is exploding all around him. First his lover leaves him to marry a woman, then childhood nightmares return with a vengeance.
Luke’s friendship with Ben Skinner and relationship with Kyle Morgan helps him heal his broken heart, but the nightmares, which are actually repressed memories, threaten to destroy the peace he has found.

Soon, Luke’s investigation into his past puts his life—and the lives of the people he cares about—in danger. But he refuses to give up, not even when he finds out he is connected to a massive government cover-up...

Contest:
Ethan is giving away an eBook copy of Subject 13 to one lucky person.  Leave a comment along with your email address to be entered, contest ends 11/29. 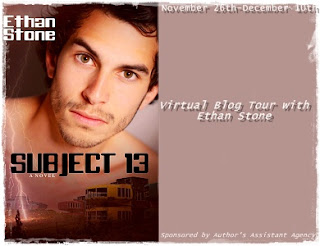