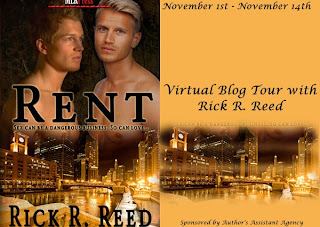 RomFan Reviews would like to welcome Rick R. Reed to our humble little world.

Rick is sharing an interview that he did with a real escort that I hope everyone will find just as enlightening as I did. Then I hope you will pick up a copy of Rent which takes us into the fictional world of "rent boys".


Confessions of a Male Flesh Peddler

I did this interview back in the thick of my days as a columnist for Nightspots. I thought it would be interesting to share with you now, since I just released RENT, my male escort romantic suspense novel.

My new book is fiction.

The interview below is real life.

Male escort Lee Clifford was very gracious as we sat on his back porch discussing things that would make a sailor blush. I don’t know if Mr. Clifford is any longer involved with the world’s oldest profession, but his experiences and thoughts, I think, are just as valid now as they were that warm summer evening when we last met.

For a good time, call Lee Clifford. He’s been a “rent boy” in Chicago for more than seven years. I sat down with Lee recently to find out what it’s like to get laid and get paid. Here’s what he said.

RR: What made you get into the business?
LC: I came to Chicago from the Twin Cities. I had a friend with a catering company whom I could live with until I got settled. I was doing odd jobs: waiting tables, cleaning, and so on. He and I had a disagreement and I moved out and met this guy. I stayed with him for three weeks, but already had my own place picked out. I just needed the security deposit. I kept wondering how he was getting by; he seemed to be doing all right for someone who had left his job. I picked up one of the local gay rags and saw an escort ad and thought, “Oh! I know that phone number.” So once I got my place, I put in my own ad.

RR: So it worked out for you?
LC: Yes. If I had known it would be that good, I would have come down ten years earlier.

RR: How do you separate your private life from your escort life? Or do you?
LC: I guess I do. But…I mean you can have fun and get paid for it, too, right?

RR: Did you ever date anyone or have a boyfriend?
LC: No. It would take a strong guy to deal with what I do.

RR: So your friends are cool with it?
LL: Oh, they’re fascinated by it.

RR: What about your family?
LC: No.

RR: They don’t know?
LC: No, they don’t want to know. There’s no reason for them to. They know I’m gay; that’s all they need to know.

RR: So, is this your sole way of making a living?
LC: No.

RR: What else do you do?
LC: I’ve had various jobs. Usually, I have one stable job and do this on the side. I also do videos, whatever I can think of.

RR: Do you ever turn people down?
LC: God, yes.

RR: What are some of the reasons you would turn someone down?
LC: I’m tired. I’m not in the mood. I don’t want to do what they want to do. They’re way too drunk. They’re too far away…I don’t drive.

RR: What about someone actually showing up…do you ever say no at that point?
LC: That usually doesn’t happen. I mean, there are times we might stop because it wasn’t working out.

RR: So how does it work?
LC: They either call or contact me online. Then we talk: what are they looking for? When? Then they’ve got their questions—rates—and all that. It’s basically a negotiation.

RR: Are you strictly top, bottom, versatile?
LC: I’d say top/versatile. I think there’s far more demand for tops than bottoms…it doesn’t have anything to do with escorts. It’s just everywhere.

RR: What won’t you do?
LC: Pain, heavy S/M, nothing violent. I don’t have uniforms. It’s usually not worth the investment to buy that kind of stuff.

RR: Is there any advice you’d give to someone who was thinking of hiring an escort for the first time?
LC: Know what you want. And don’t be afraid to say it.

RR: What if somebody wanted to become an escort? What advice would you give him?
LC: Don’t.

RR: Really? Why?
LC: Way too much competition. Every dick thinks he can do it.

RR: Any other reason?
LC: If you can’t handle rejection, don’t get into the business. It’s not as easy as everybody thinks it is.

RR: What’s the best experience you’ve had as an escort?
LC: It’s hard to pick out one as the best. There have been a lot of fun times.

RR: What about the worst?
LC: I remember one gentleman who made me very uncomfortable, and when we were finished, he threw $20 at me and ran out the door. There’s never been anything violent.

RR: What about the weirdest?
LC: There was only one time I ever thought someone needed to get help. His first time had been with a straight guy, they got drunk, and then the straight guy sobered up and beat him up. So this guy eroticized that and wanted me to recreate the experience. He wanted me to basically leave him for dead. Not dead, but blood, broken bones… I told him I couldn’t do that. There’s no such thing as legalized assault. 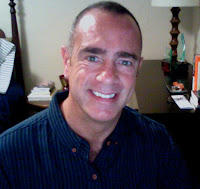 About the Author:
Rick R. Reed is all about exploring the romantic entanglements of gay men in contemporary, realistic settings. While his stories often contain elements of suspense, mystery and the paranormal, his focus ultimately returns to the power of love. He is the author of dozens of published novels, novellas, and short stories. He is a two-time EPIC eBook Award winner (for Orientation and The Blue Moon Cafe). Lambda Literary Review has called him, "a writer that doesn't disappoint." Rick lives in Seattle with his partner and a very spoiled Boston terrier. He is forever "at work on another novel."


On the worst day of his life, Wren Gallagher loses his wallet, his job, and his security. Can a stranger met in a bar deliver on his promises of wealth and meeting Mr. Right?

Sex can be a dangerous business. So can love....

On the worst day of his life, Wren Gallagher wants oblivion when he steps into Tricks for a drink. He's lost not only his job, but his wallet as well. When a mysterious stranger steps up to pay his tab, he also offers Wren the key to fulfilling his dreams of prosperity and true love. But appearances are not always what they seem....

His savior is the owner of the escort agency, A Louer---and he wants the young and handsome Wren to work for him. So down on his luck, Wren figures---why not? He can use the money. When he joins, though, he hadn't counted on meeting Rufus, another escort with whom he quickly falls hopelessly in love.

But their love story will have to overcome the obstacles of not only trading love for money, but A Louer's dark---and deadly---secrets.

Read my review of Rent here

Contest: Rick is giving away an ebook copy of Rent to one lucky person at each of his stops.  Just leave a comment with your email address to be entered to win.  Contest ends November 11th.  Make sure you follow all of his stops and enter each contest for more chances to win.

Posted by RomFan Reviews at 12:14 AM
Email ThisBlogThis!Share to TwitterShare to FacebookShare to Pinterest
Labels: Author Interview, Contests