Thanks for having me here at RomFan Reviews, Annette. You’ve had some great authors here, such as Brita Adams, whom I adore. I’m honored to occupy the same electronic halls they have graced with their presence.

That’s why I’m thrilled that this is the first stop on my bog tour!

I also wanted to let everyone know that as part of the blog tour, I’m holding a contest. All you have to do is leave a comment with your email to this post, and your name is entered to win a free electronic copy of 3. If a reader happens to follow all my blog stops, then she or he can leave a comment at the other sites a well. This means that someone could enter 7 times for a chance to win the book. At the end of the tour, a winner will be chosen and announced.

Tell us a little about your new release 3 that became available on October 15th.

I’ll start by saying that 3 is a contemporary m/m/m romance. It tells the story of three men, Justin, Spencer, and Dutch, whose lives have become inexorably linked.

Justin Jimenez is a flawed man. He is proud and stubborn, but his heart is so big that when he falls in love, he falls hard just as he did with Spencer ten years ago. Justin feels as if the universe magically brought them together, which is why he is so devastated when he and Spencer separate after a year of romantic upheaval.

Guarded and cautious, Spencer Harrison has never found it easy to let down his guard enough to be able to fall in love. When Justin obliterates his defenses with no more than a kiss upon their first meeting, he is surprised. What shocks him even more is when he and Justin almost break up. Spencer is so devastated he flees to England for four months to escape the pain of heartbreak.

Dutch Keller charges through life with both barrels, rarely weighing the consequences of his actions. If it feels right, then he does it. Still, meeting and falling in love with Justin while Spencer is abroad terrifies Dutch. He is uncertain if Justin’s love for him will prove stronger than the feelings Justin has for Spencer. Dutch also fears the secret that he and Spencer share, and he wonders what his hidden relationship with Spencer might do to his relationship with Justin.

When Spencer learns of Justin and Dutch’s affair, the first of their many secrets are exposed. The three men must untangle the web of lies and betrayals in order to find the events in their lives that led them to friendship, passion, and betrayal. If they don’t, they might never see the love at the heart of their shared pain.

I recently submitted a paranormal romance titled The Gifted One to my publisher Dreamspinner which I just found out that they accepted . It’s a story about a man and his guardian angel, but I’ve put a Stephen King-esque twist to the complications on the path to love. I’m a fan or horror and romance, so when I came up with this idea, I saw the opportunity to merge the two genres together. I had great fun writing it, and my husband and beta reader enjoyed the mixture of romance with horror.

I also just finished a short story about a man in his fifties, who is trying to piece his life together after being shoved out of the closet by his vindictive ex-wife. He wants to move on, but as the town pariah, he finds it difficult to get past his mistakes at least until he becomes reacquainted with his son’s childhood best friend. I’m hoping to get this short story into an anthology titled Snow on the Roof.

Well, I used to dance naked outside while listening to Lady Gaga, but when the neighbors complained, I had to change my tactics.

When dancing naked fails, nothing gets me in the mood to write more than reading. My creative side just opens up when I lose myself in someone else’s world, and ideas just flow out of me. I constantly stop what I’m reading to write my ideas down. Then, when it’s time, I sit in my comfy chair with my laptop and start pounding away at the keys.

I know it’s not as spectacular as naked Lady Gaga dancing, but really, who wants to see that?

This is something I struggle with. I used to be a pantser, but I found that it didn’t work for me creatively. For me, stories and characters take on a life of their own, and the story that I started writing changes a great deal by the time I get to the end. When I don’t plot, I usually have big holes or continuity problems that require major revision.

For the last two novels I completed, I plotted them, and when the story changed, it was easy for me to go forward in the outline and make the necessary changes before they could cause huge headaches later.

You also have an alter-ego as an English Professor how do you juggle both careers?

It’s a source of constant frustration for me. Just ask my husband and those closest to me. They can fill you in on how much of a bear I become when my writing and my day job conflict. While I love my job and the opportunities it affords me to write, my ultimate goal is to write full time. Until then, I try my best to compartmentalize the two. During the school year, I try to write at least a couple of hours every day. During the summer, it’s all about writing. I can write for 12 hours and not even realize 12 hours have passed.

Are any of your characters based on real people or events?

I think many authors base their characters on people they know and around events they’ve experienced. I know I do. For me, it adds that believability to the mix, to make the characters come to life for the reader. Justin and Spencer are based partly on my husband and me. I infused a mixture of our personality traits into both of them, so in a way they are the best and worse of the both of us!

Michael Thomas Ford influenced my love of gay fiction because prior to him, I had read no other mainstream, contemporary novels with gay characters as the main characters. I had always wanted to write one, but I let uncertainly about the subject matter get in the way. Ford gave me the strength to find my own voice. Other than Ford, Stephen King has been a major influence in my life since I was a child. His books fanned my love of writing and made me want to be a writer in the first place.

Is there anything you find particularly challenging in your writing?

How do you come up with the titles?

It happens in many different ways actually. Sometimes, the title comes from the theme of subject matter or even a song that inspires me. Lately, music has been my muse. I listen to lyrics or read a song’s title, and I imagine a story that fits.

I love going on vacation with my family, but it’s not very relaxing sometimes as anyone with children can attest. Not that I don’t love my children, because I do, but for real relaxation, I look forward to our annual trip to Provincetown. My husband and I spend a few weeks there, where we rent a condo with some dear friends. We have a blast hanging out, going to the various events, and just enjoying ourselves. It’s always a sad day when we leave Provincetown, but I’m definitely refreshed when we do.

Do you ever suffer from writer's block? If so, what do you do about it?

I stomp around the house and pout. It may sound childish, but I really do. I get so upset when I’m creatively constipated as I call it. After I’m done throwing my tantrum, I pick a book and read. After a few chapters, my mind starts working again like usual. I guess in those situations reading becomes my artistic laxative.

What tools do you feel are must-haves for writers?

Willpower and a thick skin.
Writers need the willpower to get them through the writing process. It isn’t easy to create a novel or short story and requires discipline to see it through. We can have as much desire as we want to be a writer, but without the willpower to accomplish it, it won’t happen. When it does happen, that’s when the thick skin comes in. Not everyone is going to love you, and you have to be okay with that.

Let’s throw in a few fun and crazy questions:

“When Love Takes Over” by David Guetta featuring Kelly Rowland.

Not only was it the first song my husband and I danced to after we were married in Provincetown in 2011, but it reminds me that when I feel overwhelmed or lost, love in some form will snatch me from the jaws of despair. It’s corny I know, but it’s true!

What sound drives you crazy?

Hiccups. My God, I can’t stand them. I don’t know why, but they’ve always driven me crazy. It annoys the fool out of me! Put me in the same room with someone who can’t stop hiccupping and watch me lose my cool.

A biography has been written about you. What do you think the title would be?

If you were stranded on a deserted island, what three things would be the most essential for you? 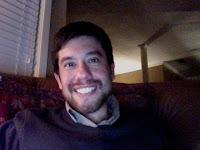 Jacob Z. Flores lives a double life. During the day, he is a respected college English professor and mid-level administrator. At night and during his summer vacation, he loosens the tie and tosses aside the trendy sports coat to write man on man fiction, where the hard ass assessor of freshmen level composition turns his attention to the firm posteriors and other rigid appendages of the characters in his fictional world.

Summers in Provincetown, Massachusetts, provide Jacob with inspiration for his fiction. The abundance of barely clothed man flesh and daily debauchery stimulates his personal muse. When he isn’t stroking the keyboard, Jacob spends time with his husband, Bruce, their three children, and two dogs, who represent a bright blue blip in an otherwise predominantly red swath in south Texas.

You can follow Jacob’s musings on his blog at http://jacobzflores.com or become a part of his social media network by visiting http://www.facebook.com/jacob.flores2, http://twitter.com/#!/JacobZFlores, or http://www.goodreads.com/author/show/5142501.Jacob_Z_Flores 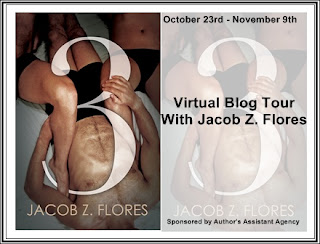 Posted by RomFan Reviews at 12:00 AM
Email ThisBlogThis!Share to TwitterShare to FacebookShare to Pinterest
Labels: Author Interview, Contests