SEASON FOR SURRENDER Blog Tour: What’s In a Name?

Thank you, RomFan Reviews, for hosting me today! I’m glad to join you as part of the blog tour for my new historical romance, SEASON FOR SURRENDER.

This book tells the story of a naughty house party, set during the Christmas season, during which:
*a rake admits that he is secretly a bluestocking;
*a bluestocking discovers that she is fond of being rakish; and
*they both puzzle out an encoded book, collect mistletoe, face their greatest fears…and, of course, find love.

Today I’ll tell you a few behind-the-scenes secrets about how I picked the character names in this book, starting with the hero. Alexander, Lord Xavier, played a minor (villainous!) role in my romance debut, SEASON FOR TEMPTATION. I came up with his title first and liked pairing it with another name that contained an X. Don’t you think of him as sort of sharp and haughty, with all those X’s in his name? And so everyone thinks he is. But are they right about that? Not really, as the heroine soon learns.

Louisa Oliver, the heroine, owes her first name to Jane Austen. It comes from the Great Jane’s early novel Northanger Abbey. In this fun scene, the heroine and hero are talking about their love of novels:

“I really thought before, young men despised novels amazingly.”
“It is amazingly; it may well suggest amazement if they do—for they read nearly as many as women. I myself have read hundreds and hundreds. Do not imagine that you can cope with me in a knowledge of Julias and Louisas. If we proceed to particulars, and engage in the never-ceasing inquiry of ‘Have you read this?’ and ‘Have you read that?’ I shall soon leave you as far behind me as—what shall I say?—I want an appropriate simile.”

Jane Austen uses “Julias and Louisas” as shorthand for “heroines of novels.” How could I resist calling a heroine Louisa? (And yes, the heroine of my romance debut was named Julia.) J

Jane Tindall, a distant cousin to Lord Xavier, attends the house party and befriends Louisa. Her last name honors Milo Tindle, the sneaky, smart character played by Michael Caine in the movie Sleuth. Jane shares those qualities, so she gets to share the name too.

As for Jane’s first name, I wanted to pick something plain and sensible to suit her character. It just now occurs to me that I owe Miss Austen another debt, since I borrowed her own first name for this!

Lord Lockwood, the book’s villain, and Lord Weatherwax, a friendly and constantly tipsy house party guest, both got their names from the crew credits of British-made movies. Inspiration can lurk anywhere, right?

Signora Frittarelli is an opera singer invited to be a scandalous party guest—but she turns out to be more helpful and kind than Xavier expects. I chose an Italian-sounding name that didn’t actually translate to anything, because this lady can’t quite be pigeonholed. But the sound of her name was inspired by the word “farfalla,” which means “butterfly.”

What are some of your favorite character names from books or movies? Leave a comment to let me know! I’m offering a signed copy of SEASON FOR SURRENDER to one commenter, open internationally.

HONOR AMONG ROGUES
Alexander Edgware, Lord Xavier, has quite a reputation—
for daring, wagering, and wickedness in all its delightful
forms. But the wager before him is hardly his preferred
sport: Xavier must persuade a proper young lady to attend
his famously naughty Christmas house party—and
stay the full, ruinous two weeks. Worse, the lady is
Louisa Oliver, a doe-eyed bookworm Xavier finds quite
charming. Yet to refuse the challenge is impossible—he
will simply have to appoint himself Miss Oliver’s protector…

MISCHIEF AMONG MISSES
Louisa knows her chance for a husband has passed. But she has no desire to retire into spinsterhood without enjoying a few grand adventures first. When Lord Xavier’s invitation arrives, Louisa is more intrigued than insulted. And once inside the rogues’ gallery, she just may have a thing or two to teach her gentlemen friends
about daring… 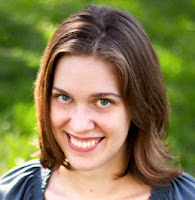 Historical romance author Theresa Romain pursued an impractical education that allowed her to read everything she could get her hands on. She then worked for universities and libraries, where she got to read even more. Eventually she started writing, too. She lives with her family in the Midwest.
Connect with Theresa at:

Giveaway Details:
One randomly drawn commenter from each tour stop will win one autographed copy of SEASON
FOR SURRENDER. Contest is open internationally. Earn an extra point for ‘liking’ Theresa on Facebook and ‘following’ her on Twitter! Contest ends on October 5th.
Tour Stops:


Additional tour stops can be found at:
http://events.litconnect.com/season-for-surrender-by-theresa-romain
The more stops readers comment on, the greater their chance of winning. 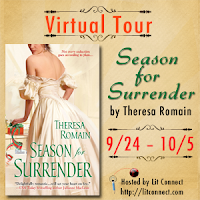 Posted by RomFan Reviews at 7:00 AM
Email ThisBlogThis!Share to TwitterShare to FacebookShare to Pinterest
Labels: Author Interview, Contests