Welcome to Day 1 of the Perfect Blog Tour, with Kallypso Masters and friends.

Thank you, RomFan Reviews, for hosting me!

This six-day Perfect Blog Tour celebrates the release of Nobody's Perfect (Rescue Me #4), by Kallypso Masters, which released this week—FINALLY! Perfect continues the long-awaited Happily Ever After for probably the two most wounded characters in the series, Damian Orlando and Savannah Gentry (now Savi Baker). Their heartbreaking story began in Masters at Arms (a free read—see links below) and the couple reunited in Nobody's Hero after eight years apart.

Those who follow me on Facebook know that, as an incest and child sexual abuse survivor myself, this book was akin to opening a vein and pouring my lifeblood onto the page. I usually take 2-3 months to write and edit a book in this series (tops). This one took nearly eight months! The result is not an autobiographical story, but my fellow survivors will come face to face with a lot of the same triggers and aftermath we all suffer as a result of our abuse.

It started out innocently enough. I contacted Kallypso Masters in June to find out when Nobody's Perfect (Rescue Me #4) was going to be released. June 26 had come and gone, and no book.

I admit it. I'm a rabid fan of Kallypso Masters' Rescue Me series. Like all of her readers, I was anxiously awaiting Damián and Savannah's story. The epilogue in Hero made me want to throw my Nook down and have a full-blown tantrum. How dare Kally leave me sitting on the edge of my seat like that? Well, I was just going to have to find out when the next book was going to be released. Imagine my surprise when I found out the book was not complete! Gaaaaaaaah! Nothing left but to be patient.

One thing led to another and Kally asked my opinion on some medical points in the story. I was happy to help since what she needed to know was right up my alley. Questions led to answers, leading to more questions and more answers, and I volunteered to be a beta reader, advisor, and editor on Nobody's Perfect. After all, if I could help her in any small way to get the book out and on my Nook that much faster, then it was all good.

I've never made any secret of the fact that I am a survivor of child abuse and domestic abuse. Pedophilia has touched two of those nearest and dearest to me within my closest family circle. Kally and I shared our stories and found out we had an enormous amount in common. I was about to find out it went a lot deeper than that. How could someone I had just met and, yes, became friends with (even if it was through email and Facebook) crawl into my head and write something that was so close to my life that it was almost eerie in the extreme?

But I'm getting a little ahead of myself here.

I'm a voracious reader. As an editor, it's my job. As a recreational reader, it's my joy. At the end of the day, I don't put my work down; I just pick up something that I can read that doesn't have a deadline. I love stories that make me laugh, make me cry, make me angry, make me happy, and, most of all, take me away from the crazy insanity of everyday life. Authors who can put words on paper that draw the reader in to such an extent that they can hear the characters in their heads, watch the story play out in their mind's eye, feel the emotions the characters feel as the story progresses possess a precious talent. As a reader, when I encounter those books, it is a treat not to be missed. Kallypso Masters did just that with Masters at Arms. For three solid days while I devoured every word of Masters, Angel and Hero the outside world disappeared and I was drawn into Kally's world on a roller coaster ride I thoroughly enjoyed.

Then, through pure luck, and a click of the Send button, I was eventually invited to join The Masters at Arms Family.

Nobody's Perfect deals with some of the most intense subject matter I've ever encountered. Abuse and pedophilia on a level that even the strongest among her readers would find hard to take. As a survivor and later in my professional life, I thought I'd become pretty desensitized to the things that one human being can inflict on another. Kallyso Masters writes stories about realistic characters in very realistic situations and how these characters deal with those situations day to day; she does this extremely well. Childhood sexual abuse, domestic abuse, abuse within the BDSM community, PTSD within the civilian and military settings, and healing from these traumas are the underlying themes in her stories.  I knew her work was very well-researched. I just didn't know how well until I encountered Chapter Eleven in Nobody's Perfect.

I related to Savannah on the level of understanding a child's terror and helplessness when a parent is the abuser because I'd lived it. But I only understood the depravity of Savannah/Savi's life at the hands of her father and her handler and how it shaped her on an intellectual level. In Chapter Ten in Perfect, the reader is introduced to a couple named Victor and Patti. This is a Master/slave, 24/7, collared relationship. Victor and Patti are clearly devoted to one another. Patti, however, is a survivor of horrific abuse. She is also a masochist. Pain is the key to her emotional release and wellbeing; it is her coping mechanism. When triggered, she cannot function nor can she find emotional release without it. The problem for this couple is that they require a Service Top to give Patti the extreme intensity of pain that she needs in order to reopen herself when she shuts down if triggered. Her Master cannot bring himself to deliver the extreme level of pain she requires. Damián is the only Top at the Masters at Arms Club who can deliver what Patti needs.

Victor asks Damián to administer what is known as a cathartic whipping.

In Kallypso Masters' Nobody's Perfect, Chapter Eleven took me on a completely unexpected journey. I related to the scene where Damián undertakes Patti's cathartic whipping in a way I've never previously experienced when becoming involved in a story. It began as I read where Damián is preparing himself mentally to administer the whipping. As I read the lines Kally wrote, I felt myself literally pulled into the scene. It was as though I could hear the thoughts going through Damián's head as he grounded himself. It took me back to my own experience and I relived it while reading Kally's words. As I read her descriptions, the thoughts going through the characters' heads, her description of Patti's reactions, I was taken back to my own experience to relive that unique, freeing, euphoric, amazing release that was unlike anything I had ever experienced before. I had been triggered, just like many of her readers who are survivors of their own personal hell experienced and wrote to her about. Some survivors have told her it may take them nearly a year to finish this book, because they'll need emotional breaks, but they have vowed to come back again and again because they know this story is going to provide healing for them, too, on some level. Besides, the stories are just too good not to finish. I heartily agree.

I have no doubt that this book will reopen some very deep wounds for some people. It did for me and also allowed me to experience again the incident that was the key that finally opened a door so that I could finally heal. Yes, there are triggers here, but there is healing, too. This book is a ride and a half that the reader won't forget. One of the Doms Kally consults with made the statement that this book will be compared to The Reluctant Dom for the way it pulls at and triggers emotions. I wholeheartedly agree. Yes, it is one of the most intense books I've read in quite some time.

I can also say without reservation or hesitation that it is truly one of the best books I've read in years.

Blurb:
Savannah Gentry, now Savi Baker, escaped the torture and degradation forced upon her by a sadistic father for eleven years and has made a safe life for herself and her daughter. When her father threatens her peace of mind—and her daughter's safety—Savi runs to Damián Orlando for protection. Their one day together eight years earlier changed both their lives and resulted in a secret she can no longer hide. But being with Damián reawakens feelings she wants buried—and stirs up an onslaught of disturbing flashbacks that leave her shaken to the core with little hope of ever being a sexual being again.

Damián has his own dragons to fight, but has never forgotten the one perfect day he spent with Savannah in a cave at the beach. He will go to the ends of the earth to protect Savi and her daughter, but can never be the whole man she deserves after a firefight in Iraq. Besides, the trauma of war and resulting PTSD has led him to find his place as the Masters at Arms Club's favorite sadist. Savi needs someone gentle and loving, not the broken man he has become. But he sees that the lifestyle he's come to embrace also can help Savi regain control of her life and sexuality. How can he not help redirect her negative thoughts and actions if she needs him?


For those new to the Rescue Me series, the intensely emotional stories will have you laughing, crying, screaming, and experiencing a catharsis of your own as you read about these honorable, loveable, but quite imperfect characters who still manage to fumble toward ecstasy in the arms of their perfect mates.

The stories are told in chronological order and build upon past stories, so you'll readers are advised strongly to read the series in order. To help you enter their world and understand many of the main characters in the series (who will return in book after book), the introduction to the series, Masters at Arms, is a free (Amazon, Barnes & Noble, Smashwords, All Romance eBooks, Kobo, iTunes, and other booksellers). Masters is followed by Nobody's Angel (#2), Nobody's Hero (#3), and Nobody's Perfect (#4). At least five more books are planned over the next few years, but no other publication dates have been set.

Find Kally at the following places: 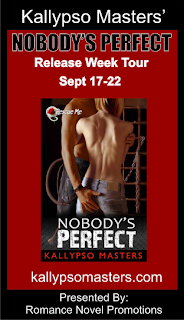 Contest Information:
Kallypso will be offering one commenter a $10 Gift Certificate to bookseller of choice on each blog. Please leave a comment with email to enter for the daily prize. No Email = No Entry. Contest ends tomorrow so get your comments in now for a chance to win.

She will also be offering one commenter from the whole tour a grand prize of a $200 Gift Certificate to book seller of choice. Fill out the form below for the grand prize entry
Posted by RomFan Reviews at 8:49 AM
Email ThisBlogThis!Share to TwitterShare to FacebookShare to Pinterest
Labels: Author Interview, Contests