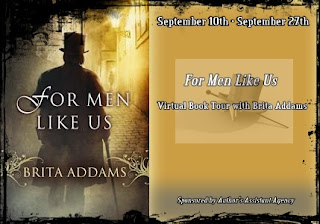 Welcome back to RomFan Brita, it is always a pleasure to have you with us.

Thank you Annette, for having me. I always love coming by and saying hello. Before we start, I'd like to tell everyone about the contest that I'm running throughout the duration of the tour:

At each stop of the tour, I'll give away a copy of an ebook from my backlist to one randomly drawn commenter. For Men Like Us, the newest release, isn't eligible.

At the end of the tour, I'll select one person from all of the commenters and that person will win a swag pack, containing *tons* of Brita Addams swag.

Now, with that bit of business taken care of, ask away! J

Tell us a little about your new release For Men Like Us.

This story is one that has come to mean a lot to me. First, it's an historical, set in the Regency era, shortly after the Napoleonic War. He is a gay man in an era when homosexuality was a hanging offense. This makes Ben a very lonely man. To make his situation even more difficult, Ben is haunted by events that took place during the war, because of his preference for men.

Preston Meacham is a man whose life was torn to shreds by the war. After leaving his service to the Crown, Preston attempts employment, where he misinterprets the attentions of his employer. Fear forces the employer to dismiss him, setting in motion a series of events that causes Preston to give up all hope.

With no pride left, Preston loses himself in the bodies of nameless men at one of the many molly houses in London. The sex numbs him to the desolation of his life.

One night, he discovers Ben in a damp, acrid alley and the two men's lives become inextricably linked.

I have submitted a rather long novel, 105k, set during the era and glamour of old Hollywood. I'm waiting to hear from the publisher on that one.

Meanwhile, I'm writing a novel set during the French and Indian War, 1754. This book will be the beginning of a series, which will span 200 years in the lives of one family.

I am a genealogist and in the many years that I've traced my family history, I've uncovered many interesting stories, which have given me great material for these novels.

I'm taking my time with them, so they won't be out for awhile.

What is your favorite thing about being a writer?

I love the creativity. I've done so many things in the creative vein—flower arranging, macramé, crochet, knitting, cross stitch, and a huge variety of other crafts, and nothing has ever fulfilled that part of me that screams creativity, like writing. I get totally lost in the moment when I'm writing, a scene becomes my entire world. Nothing beats it!

I have several male/male offerings—contemporaries A Minute After Midnight, Free Me, and In His Arms, my vamp historical, Love Immortal, and my new release, For Men Like Us. Ménages—Chocolate, Tea, and the Duchess and Splendid Captivity.

I have some favorites—A Minute After Midnight; a sweet story I wrote called An Evening at the Starlight, which sadly hasn't gotten much notice. It is the story of how we have to grasp love because we never know when it leaves us. There is no sex in that one at all. The other favorite I have is Her Timeless Obsession, which I wrote under my real name. Demands of the Heart is a romance that is near and dear to me, as it is the first thing I ever wrote, then rewrote.

For pure, unadulterated erotica, I have the male/male Romeo Club shorts.

Folks can check out my bookshelf and see what appeals to them.

What do you hope readers take with them after reading one of your stories?

I simply hope that when people read a Brita Addams book, they know that I attempted to write characters and a story that will stay with them. I don't write lesson into my stories, save for in An Evening at the Starlight, and then, that is subtle and no preaching.

I love well-told stories, with characters that make me laugh, cry, and everything in between. Those are the kinds of stories I try to write.

Hmm. Let's see. I've lived a pretty interesting life, in many aspects. I've lived in Iceland, the absolute vacation spot of the world. I've met many celebrities, talked to many, have collected autographs since I was a young girl, and even kissed Mickey Rooney. 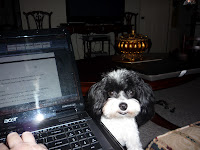 I live a pretty normal life. I have grown children, two grandchildren, a cat named Stormee, and a grandpuppy named Fiona. Okay, I actually have four grandpuppies, lest my other daughter read this. They are Chopper, Chloe, and MoJo.

I have worked as a receptionist for an aluminum company, office manager for a CPA firm, a substitute teacher for some very incorrigible middle-school students, and worked a kiosk in the mall with a friend, taking pictures and putting them on t-shirts, calendars, and tote bags.

I've been on ten or twelve cruises and was a guest lecturer on many of them, as part of their enrichment programs.

And last, but not least, I've been married to my best friend for many years and wouldn't trade my time with him for anything in the world.

It's funny that you ask this question. My family is very proud of what I do, though, for the most part, they haven't read anything I've written. However, I do get teased a lot about writing "naughty books."

I actually bristle at that, because I write romance, first and foremost, so it begs the question, is romance naughty? Me thinks not!

LOL I wouldn't know how to act if I had only one project going at a time. Take my current work. I actually started what I thought was a standalone novel. However, as I reached 12k, I realized that the background I was writing would make a great novel in itself, soooo, I put that one on hold, while I write the beginning of what will blossom into a four or five novel series.

In between, I write blog posts and some episodes of Boxer Falls, which is a really fun project with my friends, Damon Suede, Poppy Dennison, Ellis Carrington, and a whole slew of really talented authors who contribute regularly. Never read our Gay Time Drama? For shame. Twenty lashes with a wet something or other.

Check out the M/M Romance group on Goodreads for all the episodes. Such great fun!

For twenty something years, my husband and I have had date night, every Friday. Since his retirement a couple of years ago, we instituted date day, which gives us greater flexibility. Usually, it's something as benign as a movie and dinner, but sometimes we mix it up and it's lunch and movie, with maybe a stop off at our favorite coffee shop. We like to shake things up every now and again. LOL

We also spend every evening together, coming together about 5, when he has dinner ready. Yes, the man cooks like a chef! His favorite apron is one I bought him years ago. The front shows a huge hamburger bun, and says, "Keep your hands off my buns." (He'd just love that I told everyone that story.) *shrugs*

We watch television in the evenings. It might be a singing or dancing competition, our favorite dramas or comedies, or something streaming on Netflix, usually period pieces, but whatever it is, we do it together.

I've joked for years that since we do everything together, we had snaps surgically implanted in our hips. Our kids would agree. Rarely do you find one of us without the other and we wouldn't have it any other way.

I also read at bedtime, which is always nice for me. I truly look forward to that time.

Who are some of your favorite authors?

I have an eclectic mix of authors that I enjoy, and the names are always changing. Some that never disappoint are Pamela Clare, Mary Balogh, Lisa Kleypas, Aleksandr Voinov, Damon Suede, and the list goes on.

Read my review of For Men Like Us (here)

Posted by RomFan Reviews at 7:30 AM
Email ThisBlogThis!Share to TwitterShare to FacebookShare to Pinterest
Labels: Author Interview, Contests