I am excited to be a guest blogger on Rom Fan Reviews. Thank you for the opportunity! Dangerous Love, my debut novel, will be released on 8.6.12.
As this is a first stop on my three-week tour, I thought I would share with you the genesis of my book. My personal story – as an author – begins with getting dumped.
I was in the New York area and he lived in Washington, DC. He met someone else who was closer and younger than I. Three months later, he called to tell me that she had dumped him. Did I want to get back together? No. (Did I want to gloat? Yes!) Before we hung up, he mentioned – somewhat out of the blue – that he wished to visit Prague.
That Sunday, my newspaper was sold out, so I picked up The Boston Globe. On the cover of the arts section was a feature story with the headline, “Pilgrimage to Prague.” I took it as a sign.
I booked a trip to Prague, expecting to find the trailblazing arts scene described in the article. At the Globe Bookstore & Café in Prague, an attractive man sat down at my table. I mistook his accent for British. We flirted and he offered to take me to a gallery. But then, he told me that he was German and his grandfathers had been in the “Army” in World War II. I understood this to mean that he was a descendant of Nazis.
As a Jew, I was traumatized. When studying Erotic Writing at The New School in New York, I based one of my short stories on the encounter.
Laura, the heroine, meets Byron, the hero, also at the Globe. The attraction between them is so powerful that neither can resist. A brisk walk in the pouring rain takes them from the café to her apartment. After they make love, Laura discovers that Byron is German and his father was in the Hitler Youth.
A few weeks after I wrote this assignment, I inexplicably woke up before 5 AM (this never happens). I decided to expand my story. I continued to get up early and wrote 1-4 pages each day before going to work. When Zsa Zsa (Byron's ex) came on the scene, I knew I had the makings of a novel.
Unrelated to my ex-boyfriend, I relocated to Washington, DC. I did have dinner with him, once. Gazing across the candlelit table, he asked me, “Exactly why did we break up?”
“I don't remember,” I lied. But then, I added truthfully, “I need to thank you.”
Do you have a story of making lemonade out of lemons? Or of one incident triggering others, in a domino effect? Comment below and enter to win a Dangerous Love eBook or $5 eGift Card. There will be one randomly drawn winner of each prize at this blog stop. Make sure to include your email address with your comment!!

In Prague, Laura feels that she has met her soulmate. Yet how can her soul merge with the son of a Nazi?
After being passed over for a promotion at a Chicago advertising agency, Laura cashes in her stock options, quits her job, and moves to Prague. There, she begins an erotic romance with Byron, only to discover that he is German and his father was in the Hitler Youth. As an observant Jew, Laura has deep misgivings about becoming involved with the son of a Nazi, but the attraction between them is so strong that she cannot resist.
When a woman from Byron’s past – the darkly exotic Zsa Zsa – comes between them, can the true love of Laura and Byron survive?

"A real page turner! Take this book with you to your favorite café and drink some steamy latte. Who knows where it may take you!" - Rachel B.

"Enticing, exciting writing at its best! Dangerous Love is not to be missed!" - Tsaurah Litzky, author of The Motion of the Ocean 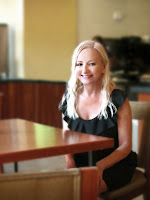 For more tour info, please go to http://www.liloudupont.com/p/events.html. Thank you! 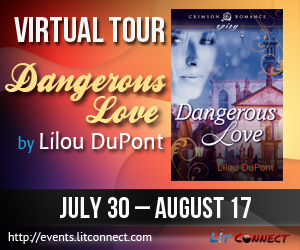 Posted by RomFan Reviews at 6:30 AM
Email ThisBlogThis!Share to TwitterShare to FacebookShare to Pinterest
Labels: Contests, Guest Blog