RomFan would like to welcome author Poppy Dennison for joining us today.

Tell me about your current book.

Mind Magic is a gay paranormal romance that explores what happens when different types of magic mix. Simon is an apprentice mage, and he’s been told to stay away from other magical breeds. When he psychically hears werewolf cubs crying out for help, he risks it all by going to rescue them.

Gray is an alpha werewolf whose son has been kidnapped. When Simon shows up with the missing cubs, sparks fly! Gray owes Simon, and offers his protection in return for his rescue of the cubs.

Simon is now an outcast from his fellow mages, but finds that life among the wolves may just be everything he’s been missing.

How would you describe your sense of humor? What makes you laugh?

I have 5 nephews and when I want a giggle, I hang out with one or more of them. I’ve not found anything more amusing than kid humor. Our favorite joke right now? “What would George Washington say if he were alive today?” Wait for it. “Help! Get me out of this coffin!” Hold on, I’ve got to giggle some more. That one really cracked me up. Another classic is “What’s invisible and smells like bananas?”… “Monkey burps”.

When did you discover your passion for writing?
My passion for writing started at an early age, through reading. I was absolutely crazy over the Trixie Belden mysteries. I’d never read about a girl like myself, raised on a farm, freckle-faced, and not always the best behaved. The early books in the series were hard to track down at that point. The first was published in 1948 and I didn’t start reading them until the mid 1980’s. My poor dad had to scour used books stores every time he went out of town for work. In between books, I’d make up mysteries of my own. I still have those written down somewhere!

Do you have a favorite personal mantra, quote, or saying that describes your outlook on life and the way you approach each day?

I saw this in an image on Facebook recently and made it my desktop wallpaper. “Three Simple Rules in life: 1. If you do not GO after what you want, you’ll never have it. 2.  If you do not ASK, the answer will always be NO. 3. If you do not step forward, you’ll always be in the same place.

I’ve lived by these rules for a while and didn’t even realize it. Number 2 should be mandatory for all writers. ASK. I love that. We have to ask questions to get a premise for our novel, ask questions for research. But it goes beyond that. We can ask our editors why they recommend a change, ask about the terms in our contract if they aren’t clear. Ask for promo opportunities. The list goes on. It leads into number 3, because if we aren’t asking questions, we aren’t learning and moving forward. Definitely rules to live by.

What inspired you to write Mind Magic?

I was inspired to write Mind Magic after a conversation with a dear friend. He loves paranormal romances (as do I) and we both love books with kids as important characters. We realized we couldn’t think of any gay paranormals where the characters had children and I wanted to explore that dynamic. What would an alpha werewolf be like if he had a child? What would make him different than other alphas?

Then came the challenge of finding an appropriate mate for Gray, my alpha. Simon, Gray’s love interest, is an apprentice mage and I loved the idea of mixing and matching magical abilities. Gray and Simon come from different worlds—and are forbidden from being together by both law and tradition. But when Simon rescues Gray’s son, they are thrown together and have to find a way to get their worlds to combine.

How can readers find out more about you and your books?

Blurb:
Magical species must never mix. According to the rules, Simon Osborne should ignore the children’s cries for help. After all, they’re werewolf cubs, and he’s an apprentice mage. But for once in his life, Simon breaks the rules and rescues the cubs, saving them from a demon intent on draining them of their magic.

Of course, all actions have consequences, and Simon’s bold move earns him the displeasure of his peers and the attention of the cubs’ alpha, a man named Gray Townsend.

The last thing Gray needs is a mage in his life, but Simon did save his son. Since Simon is now a friend of the pack, Gray doesn’t have much choice about it—or the forbidden attraction that goes along with it. Unfortunately for the alpha, he needs Simon’s help to track down the demon behind the kidnappings—before it strikes again. Simon and Gray must join forces to protect the pack, even as they struggle to resist the temptation that threatens to destroy them both.


Author Bio:
A sassy southern lady, Poppy Dennison developed an obsession with things that go bump in the night in her early years after a barn door flew off its hinges and nearly squashed her. Convinced it was a ghost trying to get her attention, she started looking for other strange and mysterious happenings around her. Not satisfied with what she found, Poppy has traveled to Greece, Malaysia and England to find inspiration for the burly bears and silver foxes that melt her butter. Her love of paranormal continues to flourish nearly thirty years later, and she writes steamy love stories about the very things that used to keep her up all night. If her childhood ghost is lucky, maybe one day she’ll give him his own happily ever after. 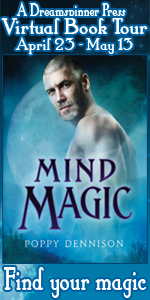