Today we have with us author Maureen O. Betita.

Welcome to RomFan Reviews Maureen it is a great pleasure to have you with us today.

Tell us a little about your new book The Pirate Circus.

The Pirate Circus is the third in my Kraken’s Caribbean series. Each of the books features a different couple of my topsy-turvy pirate. Circus is the story of Bosun Janey and her adventures with the nephew of the notorious Captain Alan Silvestri. (He got his love story in the first book, The Kraken’s Mirror.)
Benjamin is not a pirate, in fact, he isn’t certain he approves of pirates, despite his uncle’s assistance in helping to relocate him to Tortuga and out of a problem in England. Janey being a pirate doesn’t help him reconcile to the conflicted impressions – it only makes them worse! He doesn’t know what to think!
But none of that matters once his young son and niece are in danger and Janey is the only pirate in port who can help rescue them.

They face adventure and discover passion as they pursue the Pirate Circus across a Caribbean Sea full of magic, beneficent monsters and people from other times and places. The Kraken’s Caribbean is the place where anything can happen, and usually does!

Ah, piratepunk is my personal name for the genre that fits the Kraken’s Caribbean. In fact, it fits most anything I write! If there aren’t pirates in one of my books, there is pirattitude when it comes to facing life and finding the adventures along the way.
I see piratittude as a way of viewing the world and the making the most of everything that comes my way, with a belief that one must make the most of where the winds blow. There is adventure no matter the direction. My genre embraces the idea that piratittude is the technique to not only survive adversity, but to thrive amidst it. And rise above the villains of life.
I sometimes write elements of steampunk, but it isn’t really steampunk. It isn’t historically accurate – not by any stretch of the imagination – but it is very punkish since what I write abhors rules. Hence, piratepunk!

Once upon a time, I refused to outline at all. In fact, if I attempted to plot, my pirate muse would mutiny on me and climb the crowsnest and pout. Outlines and plots scared him. And me. After several years of navigating the waters of total naked ass pantsing, I have succumbed to what I call bare-bones outlining. I mix up two aspects of plotting classes I once took, the W-Diagram and the 3-Part Act, and a revision class I found some notes on and have created a hybrid that gives me a basic chart to sail. But it’s extremely flexible and it changes constantly.

But wow! It is really handy when writing a synopsis!

Who or what was your inspiration to become a writer?

I was a reader first. Grew up on Edgar Rice Burroughs, Tolkien, Michael Moorcock and Fritz Leiber. I love a good adventure story and spun stories as I lay in bed at night, drifting off to sleep. In time, my practical side won over and tried to tell me to write historical fiction, ala James Michener.
Practical never really caught on or filled my sails. So when the writing time finally rose from the surf…it was adventure. All. The. Way.

I know it seems these two questions are always asked but readers and future writers like to know.  What do you like most about writing?  What do you dislike about it?

What do I like about it? BWHA HA HA! Playing God. Honestly, I absolutely get off on sailing off into the wild, tossing storms and giant waves and all manner of strife at my characters. Then rewarding them with a hot spring and a bottle of chilled wine after some trying adventures. I love my imagination and nothing makes me smile more than sitting in my local Starbucks and coming up with something totally off the wall. It’s great!

What do I dislike about it? Sigh. First edits are murder. All those grandiose ideas come crashing down with the confetti of corrections needing to be made spread across the page. Though to be perfectly honest, promotion is the hardest thing for me. I actually like to promote…creating buttons to give away, temporary tattoos, putting together things to auction off, chatting with readers via FB… But the not knowing what is paying off and what isn’t - that drives me insane. And strips a lot of the joy out of the actual fun part of things.

Will this button help or be snickered at? Will anyone like these bookmarks and will they actually help me sell the book? It’s enough to sap the energy from any writer! Especially the eternal question… Am I doing enough? I’m not a big fan of the concept of enough. It’s just poisonous!

If you were not an author what else would you be?

Bet you think I’d say a sailor. HA! Actually, I think I’d like to be a professional dog trainer. Someone like Caesar Milan… Or a bartender. I’d like to know more about bartending!

When you get some down time what would you be doing?

Watching television. Yup, I have no shame. I watch television. I am attempting to learn how to sew so I can create my own costumes as I do love attending conventions. From pirate festivals, to renaissance faires, to science fiction and fantasy cons, to steampunk gatherings. I love ‘em all!

Who are some fellow authors you enjoy reading?

Simon R. Green, Jim Butcher, Kim Harrison…a ton of mystery authors…and there is a fellow Decadent author, Robert Roman, who sends me early editions of the nastiest, most horrific books…so evil I cannot put them down. I like reading Robert’s stuff!

Any advice you would like to give to future authors?

Be ready for the long haul. Don’t expect overnight glory, but strive for some glory and celebrate whatever comes your way. And give back to the community whenever possible. 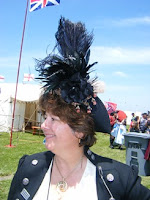 How can readers learn more about you and your books?

I have a nifty website, www.maureenobetita.com. I’m also on FB, in two places! As an author and simple as silly old me. I’m on twitter, but not terribly often. I have a newsletter I put out sporadically (you can sign up on my website) and I blog on my website and at www.romancewritersrevenge.com
I love to chat with people, write me, reach out and ask me stuff on FB! I have an author page on Amazon and Goodreads and will be at the Romantic Times Booksellers Convention (Chicago), RomCon (Denver), the Northern California Pirate Festival (Vallejo), Clockwork Alchemy (San Jose), the Romance Writers of America Nationals (Anaheim), and SteamCon IV (Seattle). Plus any other convention I can wrangle my way to! I’m easy to see, I’m generally wearing my tricorn, with a sparkly pin that read Piratepunk!
Posted by RomFan Reviews at 8:00 AM
Email ThisBlogThis!Share to TwitterShare to FacebookShare to Pinterest
Labels: Author Interview