The O-Zone is an intergalactic world ruled by Princess Andala, a self absorbed sex fiend who has recently lost her two primary sexual servants, Omni and Noble. Laryn, her new attendant/submissive is left unsatisfied with their relationship. As the princess is not an emotional woman, Laryn is left wanting more. He daydreams of a world where he would give and receive love.

Amelia Mayfield is an avid reader of the adult graphic novel, O-Zone, and attends the annual comic convention with her best friend, Kasey. Since the unusual departure of two of the main characters, she has set her eyes on the gorgeous new attendant to the princess, Laryn. A call from her friend alerting her to the news that the author of O-Zone had a booth at the convention, she holds up in her hotel room until the festivities start the next morning. After accepting an offer to meet an old friend of Kasey, Amelia opens the door to be greeted by a man in a G-string pretending to be a man of O-Zone and spends a night of intense pleasure together.

Approaching the author of O-Zone, Amelia asks the question that many fans had wondered the answer....."Did Noble leave the comic to live on earth and Omni followed because he too had fallen for and Earth woman?" Never getting a straight answer, she learns that her man from the night prior was a male escort and not an O-Zone character. Angry and hurt, she packs and leaves the convention. Amelia distances herself from the world of O-Zone the best she can, but at night her dreams focus on Laryn, her favorite character.

Late one night Amelia awakens and finds herself in the embrace of a beautiful man that strongly resembles Laryn when he tries to convince her that he truly is by seducing her, Amelia is not going to fall for another impersonator again. Laryn attempts to please Amelia go unreciprocated initially. 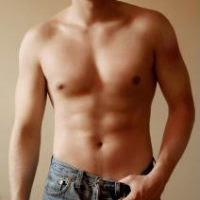 Posted by RomFan Reviews at 11:35 AM
Email ThisBlogThis!Share to TwitterShare to FacebookShare to Pinterest
Labels: erotica, review