We have with us today romance author Claire Ashgrove.

Welcome back to RomFan Reviews Claire it is a great honor to have you with us today.

Tell us a little about your new release Immortal Hope.

Immortal Hope is the first book in my dark, paranormal series, The Curse of the Templars.    It marries the history of the Knights Templar with the chilling aspirations of the most unholy, Azazel. In it, you’ll find a touch of chivalry long-forgotten and the resounding theme of love having the ultimate power.

Templar knights defied the archangels and unearthed the copper scroll, revealing the gates to hell. Cursed for their forbidden act, they forever roam the earth protecting mankind from evil. But darkness stalks them, and battles they fight bring them ever-closer to eternal damnation. One promise remains to give them salvation – the return of the seraphs.

Embittered by his purpose, Merrick du Loire must honor an ancient pact and bring peace to his cousin’s soul. When he stumbles upon history professor Anne MacPherson, he discovers she possesses a sacred artifact that marks her as a seraph. Duty demands he set aside his personal quest and locate the knight she’s fated to heal. As he struggles with conflicting oaths, Anne arouses buried hope and sparks forbidden desire that challenges everything he’s sworn to uphold.

Anne has six weeks to complete her thesis on the Knights Templar. When Merrick takes her to the Templar stronghold, he presents her with all she needs—and awakens a soul-deep ache, he alone can soothe. Yet loving Merrick comes with a price. If she admits she's destined for him, her gift of foresight predicts his death.

What can we see next from you?

That’s kinda complicated!  I have a variety of projects going on right now, and I write under two pen-names.

So, let’s see… as Claire, immediately forthcoming, is the continuation of my paranormal short story series, Inherited Damnation, about eight children from the ancient Selgovae Celt tribe, and the cursed placed upon them by their incubus father, which promises they will kill the one they fall in love with.  The series runs parallel with the Pagan holidays, which puts book four coming in early Feb.

Also as Claire, book two in The Curse of the Templars, IMMORTAL SURRENDER, will come out later this year.  Watch the blog tour for an announcement on the release date!

What got you started in writing?

I’ve always written.  I can’t remember a time when I didn’t.  As to pursuing publication?  In 2008 I was home with my infant son and bored when he was sleeping.  I wasn’t working and figured I didn’t have anything to lose by working at it.  So I joined RWA, and three local chapters – which gave me a chance to get out of the house – and delved in all the way.  My first book was contracted in December of the same year.

What is your favorite thing about writing romance?

I like the emotional journey.  Interpersonal relationships, and intimate relationships are such a part of our lives.  Romance is the only genre that allows an author to really dig into those aspects.  You’ll find a touch of romance in almost any genre, but in the romance genre, there’s so much more depth.  That depth and those emotional journeys are so enjoyable to write about, and very satisfying as well.

What books or authors have inspired you?

Johanna Lindsey inspired me initially, back when I was a teen and writing stories about my rock band.  Hee!  But I honestly have to say that the authors who have inspired me the most aren’t in the romance genre.  They are the Masters – Faulkner in particular, and Steinbeck.  And then there are a lot of fantasy authors who’ve inspired me, Salvatore, Paolini, Tolkien (of course!) and Terry Brooks.

In fact, my first romance writing was/is a fantasy series, which I hope to revisit in short time.

Wait for the house to get quiet J  But no, it’s pretty much like a job.  I sit down and write, daily.  Some days it’s pulling teeth to get the words on the paper.  Some days things flow like water.  I have a time I start, a time I finish, and snacks on the table to keep me going.  Otherwise, it’s all pretty routine.

Layering all the elements for the entire series appropriately, so that there wasn’t too much presented, but enough to add an element of intrigue.  I’ll be honest, The Curse of the Templars is very intricate.  The subplot even more so, and there are a lot of forthcoming twists and turns that I didn’t want anticipated.  Putting in just enough to ground those twists, without revealing them, was a bit challenging.

Following are just some fun fact questions which could be just one word answers or more:

Is there a song about chaos?  My life is ordered chaos.  Between critters, kids, and a multitude of writing projects, it’s not unreasonable for me to lose a day (or two!), and I’m pretty sure I’d forget my head if it weren’t attached.  Which is so odd compared to my writing – it’s obscenely organized.

See above – CHAOS AHEAD!

How can readers contact you and learn more about your books?

I write under two pen names, Claire Ashgrove and Tori St. Claire, and I have websites and blogsites for both:

You can email me through the websites, and I’d love to hear from you all!
Thank you so much Claire for spending some time with us it was a pleasure having you here and we hope you come back.

Thank you, as well!  It’s been great fun, and I hope to see you again.

“Nay,” he answered on a hard swallow. “Nay, Anne. If I stay another moment, I will have you in that bed.” He shoved a hand through his hair and reached for the doorknob.

“But that’s where I want you,” she whispered.

He nodded once, a sharp dip of his chin. Pulling the door open, he answered, “I know.” Another protest, and he would turn right back to her waiting arms, cart her off to that oversized bed. When he finished with her, he would hate himself.

He entered the hall and shut the door.

Determination narrowed his gaze as he descended the stairs. He trained his thoughts to his cousin, focused on the oath he swore to Fulk. The very moment Anne discovered her intended, he vowed to leave. No sacred nail, no protected relic, no other oath would he honor until he fulfilled the promise to his kin. In so doing, he would free himself from this torment and lift his blade in Azazel’s name. It was a price he no longer feared to pay. 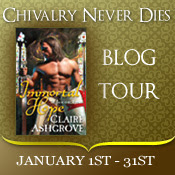 Claire will be giving away a $25 Amazon.com gift certificate to one randomly drawn commenter during the tour, and a second $25.00 Amazon.com gift certificate to a second randomly drawn commenter at the end of the tour.  Be sure to follow the tour and comment; the more you comment, the better your chances of winning! Click the Blog Tour badge for a complete list of blog stops.