My Christmas memories are divided into several categories. There are those involving my parents and siblings, and then there are those that I've created with my own family. All warrant their own reflections and all live on in photographs stashed in photo albums and picture frames.

To restrict this piece to just one would somehow limit the scope of all those memories, so I'll try to comb through the tinsel and recount just a few of the standouts.

There would of course be the year my parents gave all four of us sleds for Christmas and there wasn't a flake of snow on the ground that year in upstate New York. It wasn't until four days later when the blizzard came through, crippling all travel and thrilling the children.

An even earlier memory is one that I'm not so sure is a memory or just firmly embedded in my brain because of the repeated telling over the years. My grandparents were poor people and my grandmother had only one fervent wish—to own a red and white Formica kitchen table, with matching chairs.
I must have been eight or nine at the time and honestly didn't see the hubbub, but my aunts and uncles, mom and dad, all got together, pooled their resources and bought Gram her table and chairs. Someone in the family got my grandparents out of the house and the rest of the family brought the new set in, placing in the kitchen with a huge red bow in the center of it.

When Gram walked in, she huffed (her way) and sat down at "her end,") which is where she was when this photo was taken. She loved that set and cherished it until she died. 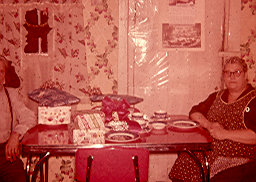 There are varied memories of my mom decorating the tree with single strands of tinsel, her job each year. I can still see her doing it and then standing back to admire how the tree sparkled. Lord, how she loved Christmas and in her absence, a bit of the magic has disappeared. 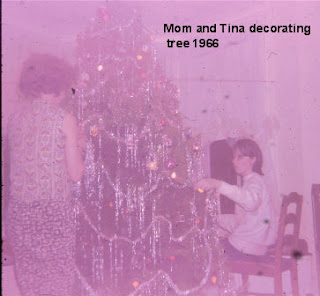 Christmas stockings at the foot of our beds each Christmas morning, the tangerine filling out the toe and then small games to keep us occupied until the hour was civilized enough to wake Mom and Dad for the grand unwrapping ceremony.

Each gift was opened individually, so everyone saw what everyone else got. There wasn't a mass opening with the whole thing done in five minutes. No, my parents made a production of it. That's one thing I continued with my family, and often we have to take breaks to get through it, but no one just dives in. My theory is—if I have to suffering through the buying and wrapping, you will wait your turns. Everyone's used to it by now and no one grumbles—too much.

When I had my family, I created "Ta-Da" gifts, which is something we've done since my oldest was little. With all the gifts finally opened, everyone starts talking and enjoying their bounty. However, we've saved the best for last. Now, it could be just for one person or several and only the givers are privy to that information.

Everyone is asked to close their eyes and the count begins. "1 – 2 – 3 – Ta-Da!" When everyone opens their eyes, the recipient finds the giver standing before them. Usually the grandchildren always get a Ta-Da gift—they really don't understand the concept of unselfish giving. There have been times when I've gotten the gift, from my husband of course, and then there was the year we all got together and got a fancy easel for our artist son-in-law.

Whatever the gift is, it's memorable and the best one of the day.

I loved the year my son, who was seven or eight at the time, told my husband and I that he'd found out there was no Santa Claus. He'd hedged his bet though and waited until we'd bought the gifts that year, "just in case."

He came to us one day and asked to have a serious talk. "We can't tell Sissy though, cuz she's only three. We'll wait until she's grown up, like me." He so loved being a part of the Christmas conspiracy. J

All this aside, for me, sentiment is very much a part of the Christmas season. I think of those no longer with us and miss all they contributed to my years of Christmas memories. They are missed more with each passing year.

There is a standout for me, one memory I recall each year as the leaves drop from the trees and other parts of the country gets snow (the deep south isn't known for its snow accumulation).

Maxwell House Coffee used to have the most beautiful commercial and it kind of sums up the spirit of Christmas for me.

A young man comes home for the holidays and finds his mom sewing rag dolls late into the night. She explains that the church Christmas party is the following day and she has many to finish before she can sleep.

He brews a pot of coffee and they sit and talk while mom sews.

The next day, he accompanies her to the party, where presents are given out to all the children less fortunate.

Then, a box wrapped in bright red paper is given to a blonde-haired little girl so cute she'd melt anyone's heart. She was kind of timid, but slowly undid the tape, peeled back the paper, and finally, lifted the lid off the box. Her face lit up as she lifted a blonde-hair doll from the tissue paper.

Camera pans to the mom, who had her hands up to her eyes. The son leans over, kisses her cheek, and says, "Merry Christmas, Santa Claus."

Still brings tears to my eyes and the full meaning of Christmas to my heart.

For anyone who leaves a comment telling me about their favorite Christmas memory, they'll be entered into a drawing for an ebook of the winner's choice from my backlist (Romeo Club excluded.) I'll also give away a swag pack to another commenter. Hop over to my blog and make sure to include your email address in case you win www.britaaddams.com

Posted by RomFan Reviews at 12:00 AM
Email ThisBlogThis!Share to TwitterShare to FacebookShare to Pinterest
Labels: Holiday Blog Hop