Ellora’s Cave would not be complete without some drool worthy Cavemen *fans self* can we say Angeloooooo!!!  Yes, he is real and what a sweetheart as well.  Angelo Riguero was named Ellora's Cave Alpha Caveman 2011 and as the winner he was awarded with a trophy, a $1,000 cash prize, a placement in an EC ad for a nationally distributed magazine, and the cover of the next Ellora's Cavemen calendar and of course a year of bragging rights. Can you see why?

These men do not just grace the covers but also perform at Ellora's Cave annual event Romanticon.  Carla and I had the pleasure of seeing them in action when we attended this year’s festivities.  Team Dallas takes on Team Chicago and there is no way to pick a favorite. They also performed an amazing fire dance that had me feeling somewhat sorry for them since it was a cold night but my sympathy did not last long once they started performing. 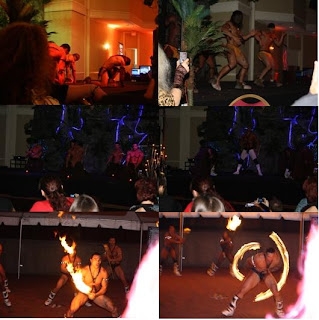 They are more than happy to pose for pictures, whether in photo shoots, as a group or at the costume parties they are always ready.
﻿
﻿

Learn more about Angelo and his fellow Cavemen Ace, Kory, Nick, Cole and Georgio who will be at Romanticon 2012.

And remember RomFan is also giving away a $25 Ellora's Cave Gift Certificate to one person see details (here)
Posted by RomFan Reviews at 9:00 AM
Email ThisBlogThis!Share to TwitterShare to FacebookShare to Pinterest
Labels: EC Week