Lately I’ve been having fun exploring the benefits of my AppleTV and the Netflix function. I’ve watched movies I never would have tried before, most I’d never heard of, including a movie called Hotel Splendide starring Daniel Craig and Toni Collette. It’s a 2000 British independent dark comedy film about a dismal health resort and its trapped inhabitants, including its chefs, played by Craig and Collette. The theme is a cool one (the conflict between obedience to tradition and the uncertainty of freedom) but for me the movie was a little “weird” and “out there.” Visually interesting but at times revolting. Not my cup of tea but definitely memorable.

My response to the movie reminded me of what a friend of mine often says—that she’d rather have people hate her book or love it rather than feel ambivalent or neutral about it. Better to make a statement and leave the reader with a strong, memorable impression, even if it’s a negative one.


The idea of anyone hating my writing makes me nauseas. Yet, I’ve had to come to terms with the possibility. Every writer does. All I can do is create something that matches the vision in my head and hope that it will resonate on some level with another person. Resonance isn’t always positive. Hotel Splendide resonated with me, but not in a positive way. Yet I don’t regret watching it. It was interesting to see someone else’s creative vision, brought to the screen in a no-holds-barred kind of way. Even if I didn’t quite “get it,” I can admire those who created it and appreciate the hard work they put into the effort.


Recently, I read a review about my upcoming book, Chosen By Fate (Book 2 of the Para-Ops series). It was a positive review (woo-hoo!) that started out with calling me “brave,” because I embodied my heroine with some difficult characteristics (like being dead, pissed off, and unable to be touched without feeling pain). I don’t think of myself as a particularly brave author, but I like the challenge of doing things a little differently or exploring topics that aren’t necessarily “easy.” In Chosen By Blood, Book 1 of the Para-Ops series, it was balancing duty/morality with desire. In Chosen By Fate, it’s balancing pain and pleasure, and how much people are willing to dish out or take to get what they want.


The other thing I’ve heard from early reviewers of Chosen By Fate is that most of them cried at certain points of the story. The cool thing is that I didn’t set out to make readers cry. But the fact they have, the fact that they have been deeply affected by the characters and world that I created, makes me feel like I’ve done something right. Something memorable.


And that’s what we all want, right? To make an impression. To be seen. To be remembered. Life may be short, but the impact we make doesn’t have to be. 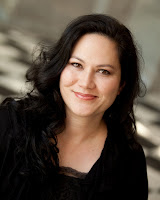 
Blurb of Chosen By Fate:

There's a fine line between life and death, pleasure and pain....

Five years after the Second Civil War ends, humans and Otherborn— humanlike creatures with superhuman DNA—still struggle for peace. To ensure the continued rights of both, the FBI forms a Para-Ops team with a unique set of skills.

Although he keeps company with a vampire and a were, human Shaman Caleb O’Flare can hold his own. But neither his psychic ability nor his healing powers can help his sexy-as-hell teammate, Wraith—a ghost with no memory of her human existence, one who cannot experience touch without pain.

No wraith has managed to exist past its tenth year, so Wraith’s time is about to run out. She wants only two things before accepting her fate: to learn her human identity and experience one night with Caleb. Willing to risk any amount of pain, Wraith propositions him. But when a sign of impending death appears on his chest, Wraith sacrifices her own needs on the chance that sex with her could kill him.

Caleb doesn’t understand Wraith’s change of heart but refuses to let her push him away. As the team travels to Los Angeles to investigate a series of crimes in the feline community, Caleb sets out to prove to Wraith that pleasure and love are worth any risk, including death.


Virna is going to give away a copy of Chosen by Blood to one lucky person who leaves a comment between now and Sunday, October 9th.  You must leave your email address in the comment box to be eligible.  Contest only valid for anyone living in the United States or Canada.  Good luck!
Posted by RomFan Reviews at 9:00 AM
Email ThisBlogThis!Share to TwitterShare to FacebookShare to Pinterest
Labels: Guest Blog