Today we have author Terry Spear with us to talk about how her idea for her her newest book HEART OF THE HIGHLAND WOLF came about and what she has coming up.

So, I now turn it over to Terry.

Werewolves in Scotland
By
Terry Spear

For my birthday, my co-workers gave me a song card that played “Werewolves in London.” I was thrilled, of course! One year, they gave me a cake featuring a torso of a Highland hunk, naked chest and wearing a kilt, and one of my co-workers--gray beard and all--was photo-shopped into a Highlander on a book that was being discarded because it was in bad shape. But I love it, and he says he’s ready to be a cover model for my next book too. I’m not sure a gray beard would work for a hunky jaguar, but…

I work at a library, and all I’ve got to say is that my co-workers are part of my pack! Two went with me to a wolf reserve south of where we live, and one of the ladies brought me literature home from a trip she’d made to New Mexico with her husband. When we have enough staff to cover our absence, we want to visit the reserve together. One of the ladies who went with me to see the wolf reserve gave me the kernel of the idea for HEART OF THE HIGHLAND WOLF.

So I want to thank Robyn again. We were at work during one of our infrequent lulls at the library, and I said, “So, Robyn, what can I write about now?”

I had already written the first six stories and had been wanting to write about a Highland werewolf clan, but wasn’t sure of a plot.

“You’ve never written about a poor werewolf before. All your werewolves are rich.” She said this in a very annoyed way.

I smiled. Every story has to be unique in some way. I LOVED the idea of a poor werewolf. But like my mother always said, “There’s no fun in being poor,” and so just being poor wouldn’t do.

I read tons about the Scots, having lots of roots over there, and I read lots of historical Highland romance stories, which have a lot of similar plots—laird is rich and gets the girl. Or laird is trying to get his land back and gets the girl.

But mine is a contemporary werewolf story. I still wanted the sword fights, the wearing of the kilt, the castle, the laird, the clan, all the good stuff that goes into the Scottish historical romance stories, but with a modern setup.

So I said to Robyn, “Okay, what about a Highland laird who has a castle, but is about to lose his ancestral home because of some financial investments in a crook’s scheme, and the master thief has taken off with their money? So to tide them over, Ian must agree to film a movie at his castle, which isn’t good because they’re not just a clan, but a werewolf pack? Now, the heroine is a romance werewolf writer who writes strictly contemporary, but has writer’s block and wants to write a Scottish historical romance. And she plans to write about this clan in her new story. Only she doesn’t know they’re wolves. And at first, they don’t know she is either.”

That was the start of the idea, and what with the billions of dollars stolen by several big financial scam artists in the news about that time, it fueled my interest in the plot and became HEART OF THE HIGHLAND WOLF, all because my co-worker suggested I write about a poor werewolf.

I start out with a kernel of an idea, but as I actually write them, the plot deepens and so Julia isn’t there just to write her story, but she plans to sneak into the castle to take back a box and all its contents that belong to her family.

The Highland Wolf in Paradise continues with the youngest brother going to the Grand Cayman Islands in an attempt to track down the man who stole their money. The dark warrior who is never sidetracked from his mission meets a wolf in paradise, and for the first time ever, he’s sidetracked!

That’s what happens when a male wolf meets a female wolf alone in paradise. And the Highland clan is still struggling with debt, so I continued the poor werewolf saga.

DREAMING OF THE WOLF is coming out in December and you want to know how I came up with the idea for that? In DESTINY OF THE WOLF, Jake Silver photographs wildflowers as a hobby. So when they have enough framed photographs all over the house, he’s talked into offering them for sale at art galleries. But when he sees a woman photographing a car’s license plate and the way she looks and the fact he can’t get into the gallery because it’s closed for family reasons, he’s intrigued with the woman and wants to learn more about her.

Now, the dreaming part is important to the story, and a couple of fans had asked a long time ago when I was going to have more dream mating because they loved it in DESTINY OF THE WOLF. I kept thinking, how could I include that in a story?

With THE SEAL IN WOLF’S CLOTHING, my editor had given me the idea when she mentioned about TO TEMPT THE WOLF and Hunter’s ties to being a Navy SEAL, that it would be fun to have had him being part of a Navy SEAL team that included all wolves. Hmmm. So I kept thinking about it, and several fans wanted to see Hunter’s sister, Meara, get her man, wolf, and voila! The SEAL team comes to call.

So just a kernel of an idea can get me going! Sometimes it takes a long time before I can work it into a new story, but it’s worth it in the end. With 6 more stories contracted, 3 wolf and 3 jaguar, it’ll be a while before I can think of another story, but I’m always, always open to suggestions!

The jaguars don’t even have any plots yet, except for the first that I’m working on. So I’m all ears.

Anyone ready to join a wolf pack in a castle in Scotland, even if they’re a little low on funds?

May all your days be filled with wolfish delights! 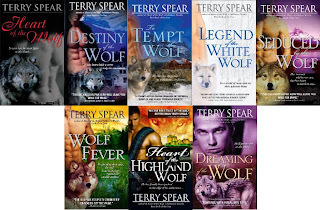 Thank you so much Terry!! Now for one lucky commenter Terry is giving away one copy of HEART OF THE HIGHLAND WOLF.  Contest is limited to US/Canada and winner will be drawn on June 20th.  Please include your email in your comment.﻿
Posted by RomFan Reviews at 8:00 AM
Email ThisBlogThis!Share to TwitterShare to FacebookShare to Pinterest
Labels: Contests, Guest Blog