Welcome to RomFan Reviews Lynsay it is a great honor to have you with us today. I know that you are really busy right now so shall we jump right in and get started?

1. Lets start with a tuff one historical or paranormal which is easier to write and do you prefer one over the other?

Actually, I’m not sure I could pick one over the other. I love them both. Although, I think the paranormals are sometimes harder to write because they’re so interconnected. There are so many books now it becomes more and more difficult to keep all the details straight which can be a bit stressful.

2. Tell us a little about your new release in the Argeneau Series Born to Bite?


I actually wrote and finished Armand’s story exactly a month after Nicholas’s and was hoping they would be published back to back like Vampires are Forever and Vampire, Interrupted were. However, it didn’t happen that way and they held the story a whole year! Sheesh, I really want to apologize to all my readers for that. Had I realized that would happen, I would have skipped those two stories or done them differently.

3. We know you have another one scheduled to be released in November Hungry for You can you give us a hint to what this book is about?

This is the story of the last Willan sister, Alex. Sam’s biggest wish finally comes true, her last sister is a lifemate to an immortal. The problem is, in the middle of trying to expand her business, and finding the endeavor riddled with problems and setbacks, the last thing Alex is interested in is meeting another one of those weird guys her sister keeps introducing her to. But when the chef at her original restaurant unexpectedly quits, leaving her in the lurch, and Sam says the latest guy she wants her to meet is a chef, he seems to be the answer to a prayer. At least he is when it comes to business. The problem is avoiding getting personally involved. The last thing she needs on top of all her other problems is a sexual harassment suit.

As for Cale, he’s been alive a long time with no sign of a lifemate until now. But getting Alex’s attention away from her business troubles seems to be next to impossible. When the troubles and setbacks turn deadly, things get even stickier. Now he not only needs to help keep her business afloat, but keep her alive as well while trying to gain her frazzled attention long enough for her to see that he’s more than just the answer to her business needs.

4. I am not sure about other readers but I can never get enough of the Argeneau Series can we expect to see more in the future?

Well I have a lot of ideas still for characters you’ve met and some you haven’t. So long as I have ideas, and so long as readers keep reading and my publisher continues to be willing to publish them than you’ll see more. Well, that and so long as I don’t drop dead or something, lol.

5. Your historical romance The Devil of the Highland Series has been a huge success is The Hellion and the Highlander the end of the series?

Originally, it was just going to be the three books. However, I’ve had so many requests for more stories in the series, I’ve decided to go back and read the three books and see if it sparks ideas for any of the other secondary characters. That will have to wait until I’m done the Regency series I’m working on right now, though.

6. Will we be seeing more from you in the historical genre soon?

The first two of the Regencies I just mentioned, The Countess and The Heiress, come out in January and February 2011, and I have contracts for two more.

7. I am sure with your schedule there is no such thing as free time but when you manage to squeeze some time for yourself in what are some things you enjoy doing?

Read, which probably doesn’t surprise anyone, lol. I also like playing video games (I maybe shouldn’t admit that.) And then we escape up to cottage country for sun and fun too. Unfortunately, you’re right, and I don’t have a lot of free time, so while there are a ton of things I’d love to try or do, I haven’t had the time yet. Hopefully, I can better arrange my schedule so that I can do some other stuff in the future.

8. If we were given a peek inside your personal library what authors might we find on your bookshelves?

9. How can readers contact you and learn more about your books?

Thank you so much Lynsay for spending some time with us it was a pleasure having you here and we hope you come back again real soon hint, hint November might be nice lol…..

Thank you, Annette. It was a pleasure.

Now for one lucky person Lynsay has offered one of her older historical books and a copy of Born to Bite. Just leave a comment and we will randomly draw one name on release day August 31st. 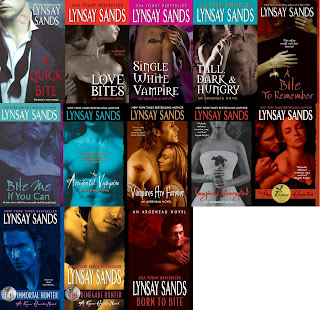